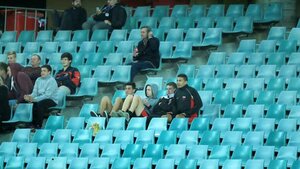 I’m not sure what is more embarrassing – the half-filled Sydney stadiums in three of the NRL finals matches across the weekend or the fact chief executive Dave Smith is claiming it a success.

The 130,000 fans that turned up to watch the four games live in week 1 of the finals was a record for that week but what Smith fails to acknowledge is that those figures were courtesy of a choc-full Suncorp Stadium for the Broncos v Cowboys all-Queensland fixture. The numbers for the other three playoff games were poor.

Smith tweeted “130k+ fans were part of Finals Series Rd 1 – a record for us! Thx to all who came along – get ready for a BIG Rd 2 #NRLFinals” to his nearly 14,000 followers. He was immediately criticised by many of them for the poor turnout in Sydney.

The reality is that Smith and his mates have two problems, which were highlighted yet again by the weekend’s crowds. One is that Sydney fans are apathetic towards the sport – probably because there are too many clubs and therefore games being played in Australia’s biggest city. The other is that they are not fully maximising the huge interest in the sport in Brisbane. The competition desperately needs a second team based in the city but expansion seems to be an after-thought at best in the negotiating of the next television broadcast deal.

The NRL needs to address the situation in time for when the next television deal kicks in for the start of 2018 but Smith’s attitude indicates little will be done.
About author
Play The Ball
This article has been written by Dale Budge. Dale is a well known rugby league commentator and journalist, having covered the sport for over 10 years.