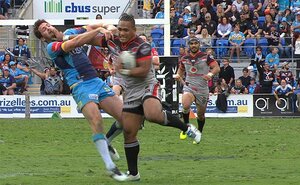 The Warriors kept their playoff dreams alive with a 24-14 victory over the Gold Coast Titans.
With upcoming fixtures against the Cowboy’s and an impressive Tigers outfit, this was a much-needed win for the Warriors with the bottom half of the top 8 being so tight.

All news leading up to this match was in regards to the returning Jarryd Hayne.
After two years chasing dreams away from the NRL, Jarryd had an inconsistent return; there were glimpses of the old Jarryd Hayne but the ring rust seemed a bit too much for him to overcome and the Warriors took advantage.
Overall the Warriors played extremely well; I believe this was their second best overall performance just behind the Round 16 loss to the Sharks.

It only took six minutes for the Warriors to score via a trademark David Fusitua diving corner try.
The game went back and forth for the rest of the first half with the scores being level 10-10 going into half time.
The Warriors were quick out of the gate in the second half with a nice try to Simon Mannering.
From there the Titans fell apart as they threw two intercepts back to back leading to two tries to Solomona Kata with the second try being an impressive solo effort by Kata.
After Kata’s last try the Warriors had a firm grip on victory and the Titans just could not get themselves back into the game.

The Warriors improved on all fronts in this performance, the defensive line has yet again improved, the days when the Warriors let soft tries in appearing to possibly be over.
The team appears to be confident and have belief in the man beside them in the defensive line and this needs to be a constant theme on game day.
They were threatening on attack and have reduced the error rate, these are all facets of their game that they need to keep up if they want to not only reach the playoffs but have some success in the playoffs.
If the Warriors continue to play this way a lot of teams will start to look over their shoulders.

My Warrior of the day goes to Solomona Kata, in a match where he was facing a close friend in Konrad Hurrell.
He had a big task marking Konrad who has started to play like he did in his first few season at the Warriors but Solomona was completely up to the task keeping Konrad on the back foot and was always testing the line when he got his hands on the ball.
And his fend for his solo effort try was one of the best I have seen in a long time.
In the past two weeks Kata has started to return to his try-scoring ways after having a bit of a drought and with him returning to this form the Warriors have legitimate scoring threats in every position in the backline.

My Warrior who needs to improve this round again goes to no one, I just cannot pick out a player that let themselves down in this game and I hope that this is a trend that continues for the foreseeable future.
Although I do hope that the goal kicking improves this week as Tuimoala Lolohea did not have a great night with the boot.

This week the Warriors return to Mount Smart to face the Rabbitohs, even though the Rabbitohs have been a shadow of the team we have come to expect in the past few season they are still a threat.
If the Warriors can stop the likes of Sam Burgess getting easy metres up the middle and keep the defensive line speed up to reduce any chances Greg Inglis has of breaking the game open then the Warriors have a good chance of adding another win to the tally which would also make it the sixth win in a row at Mount Smart.
I’m picking the Warriors to win this match by 11-20 points, I may be slightly optimistic but I think this Warriors side is on a roll and the Rabbitohs will not be able to hold them back.

What were your thoughts on the Gold Coast match?
Do you think Jarryd Hayne is going to return to his Hayne Plane form before the season is over?
Where do you predict the Warriors to be on the Ladder at the end of Round 26?