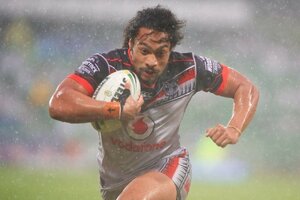 The Weather for this game was miserable and the Warriors made the game a lot harder for themselves with some poor defence and the Sea Eagles scored some quick tries and took advantage of the Warriors poor discipline and slotted a penalty goal.
Bunty Afoa continued his dream start as a Warrior scoring two tries back to back bringing the Warriors back into the game at halftime only being behind 14-12.
The second half was a tight encounter with the only points scored via an Issac Luke penalty goal.
The Warriors had a chance to take the game with Solomona Kata failing to dive on the ball over the line and then minutes later Manu Vatuvei was forced over the sideline.
Then in what was one of the most confusing moments in this contest Sam Lisone stood in at first receiver on the last tackle and made the worst attempt of a Field Goal I’ve seen in many years.
After that disaster, both teams went into Golden Point and after a few missed attempts, Daly Cherry-Evans broke the Warriors fans hearts when he finally slotted the winning field goal.

Firstly as a former prop I had dreams of getting a game-winning field goal but I was never stupid enough to try and do it in an actual game, I have no idea what Sam Lisone was thinking and I really hope that Sam finally starts to understand that he is not a playmaker and focusses on getting the Warriors going forward with big runs.

Thirdly the use (Or lack Thereof) of Tuimoala Lolohea.
Lolohea was not used until the 82 minute of this game and has again been named on the bench for Round 20.
Now unlike a lot of the Warriors fans I do not think Lolohea is going to work for us in the halves as I feel his game style is too similar to Shaun Johnsons and if you look at when Shaun plays his best, it is when he has a stable half partner.
Now I could be completely wrong and the two of them in the halves could be a master stroke, but in regards to where he should be playing right now I would be playing him at centre and moving Solomona Kata to the wing and I would move Manu Vatuvei to the bench and use him as a Forward of the bench as Manu’s time on the wing is done but the Warriors can still use him for his metre gaining ability up the middle.

My Warrior of the day goes to Bunty Afoa, this young man as done nothing but impress me in his first two games.
His defensive game, attacking ability and general game day attitude are all remarkable for a young man at the start of his career and I think he will be putting a lot of pressure on the senior members of this team and make them fight for their spot in the game day 17.

My player that needs to improve goes to Sam Lisone.
I'm sorry to mention it again but Sam you are a prop forward, you may (Like most props I know) think that you have all the playmaking skills in the world but in reality, you don’t and you need to leave the pretty stuff to the backs.
You do not see Charlie Gubb trying to be a playmaker, do yourself and the Warriors a favour and follow in Charlie's footsteps, please.

The Warriors travel to Canberra to face the Raiders in what is a must-win game for them now.
Another lost could see the Warriors fall out of playoff contention.
The last truly horrible performance from the Warriors was also against the Raiders so they will look at making amends for that performance.
The pundits and experts have all picked the Raiders to win this one but I have a feeling that the Warriors are going to fire for this game and pick the Warriors to win by 12 or under.

What were your thoughts on the Perth performance?
Do you think Tui best position is five-eighth?
What would you do with Manu?
And lastly, if you were in Sam’s shoes would you have tried to kick the game-winning field goal?


Let me know you thoughts down below

Obviously these comments are after yesterday's performance -

1. Without taking anything away from Manly but it was the immaturity (considering the experience in the side) that lost us the game in golden point.

2. I don't know about Tui at No.6. He didn't look too shit-hot last season in the half dozen games or so but this year he hasn't been given the chance to expand on that. With the hype around Higano I can see a future headache in regards to these two talents and someone is gonna get disgruntled, hopefully not enough that we lose one of them to rival clubs. Personally I'd like to see Tui in the centres. He reminds me of Jennings but an upgraded model with a better attacking arsenal. Who knows, maybe they can try something really outrageous and have them both swap positions depending on the threat. Keep them guessing. Higano may be small but he's solid on defence.

3. Manu - He needs to wake up. His scoring record reflects of the destructiveness we've missed on the wing but his consistency throughout 80mins sucks dick esp considering he's been in this side for 10 seasons or so. He's lost his way this year in terms of his natural skill set, less the "metre eating" but the way he's reacted after the dramas he's suffered on and off the field are a reflection of the different mental fortitude between an All Black champion (i.e. Dan Carter, Richie McCaw and Ma'a Nonu) and an experienced 1st Grader (i.e. Mitchell Pearse, Corey Norman and co. The list is fucking endless it's embarrassing).

4. Sam - well who knows ? Maybe he's played around with it at training and has done well at it. Maybe he thought he could replicate Zinzan Brooke by demonstrating he has more to his repertoire. If he had pulled it off against on adds and conventionalism, the league world would be in awe and "fatties" would have a new model...... but back to reality - yeah nah!