NRL 2016 Round 16 Review: Warriors go down in Golden Point Nailbiter 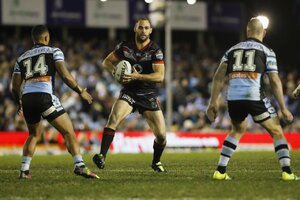 After a tough performance in round 15, the Warriors travelled to Cronulla to face the first place Sharks.
The Warriors have had three wins on the trot but the Sharks have been playing well and are currently on a 10 game winning streak.
My thoughts before the match were optimistically hopeful of the Warriors pulling out an upset but I can honestly admit I was worried that the Warriors would get dealt too by the well-oiled Sharks team.
Thankfully that was not the case as the Warriors were the better performing team on the night but lost by a James Maloney field goal in golden point.

The Warriors elected to move Tuimoala Lolohea to the bench and start Jonathan Wright on the wing in what was, in my opinion, a strange choice given how key Lolohea has been to this Warriors side this season.
In the first 30 minutes, the Warriors made too many errors but the improved defense we have witnessed from this side the past month keep the Sharks from scoring from these errors.
The Warriors crossed first with Blake Ayshford taking advantage of a nice break from David Fusitua and then moments later Jonathan Wright went over after Shaun Johnson broke through the Sharks line.
With ten minutes to go in the first half, the Warriors appeared to have a lapse in performance and the Sharks took advantage scoring back to back tries through Michael Ennis and Ricky Leutele to take the lead into halftime 12-10.
The Warriors looked to come out in the second half in the same way they started the first half until Jonathan Wright dropped a pass with no one in front of him, the Sharks again took advantage of this and went the length of the field and were awarded a penalty try after Simon Mannering held back Jason Bakuya.
After a lot of back and forth, Thomas Leuluai managed to get across the line and a penalty goal by Issac Luke tied the match up and took the game into golden point.
Both teams had chances of taking the match in golden point before James Maloney slotted a horrible looking field goal to get the eleventh win in a row for the Sharks.

This game was by far one of the better performances by the Warriors this season, yes there were still silly errors and penalties and at times the defensive line fell apart but this team has shown that they can play arguably the best team in the NRL this season at their home ground and push them to the limit.
I believe that the Warriors were the better side on the day and if Lolohea was starting instead of Wright and the penalty try wasn’t awarded that the Warriors would have walked away with the win.
The penalty try is a head scratcher for me as I don’t believe it was the right call, it should have been a sin-binning to Simon and a penalty as you could not say that the Sharks were certain to score in that situation.
Overall I was happy with the performance, there is still lots to work on but the remaining games left for the Warriors this season is not that bad with only one game left against a current top four side so they still have a chance to get into the top eight (Especially once the Eels have their points deducted – if that ever actually happens).

My player of the game goes to Simon Mannering, Simon was on fire in this game with the only mistake being the penalty try.
He made 69 tackles in this match (The most by any player this round) and gives his all every game, I think standing down as captain has helped him focus on getting back to the level we expect from him as Warriors fans.
If he continues to perform like this the Warriors will be climbing up the ladder in no time.
My player who needs to improve is Jonathan Wright, his ball handling is in need of a lot of work, you can give him a pass of the dropped intercept and perhaps even the second intercept attempt (I think the correct call would have been to dive on the ball instead of trying to scoop it up), but dropping the ball when you are metres from the try line with no defenders in front of you is soul destroying for a fan to witness.
I think Wright is a decent footballer but should only be making the Warriors side as injury cover and should never get the call up over Lolohea again.

What were your thoughts on the game vs the Sharks?
Was the penalty try ruling correct?
Would you have Jonathan Wright in your lineup?
What’s your score prediction against the Titans?