NRL 2016 Round 13 Review: Warriors too much for Bumbling Bronco’s 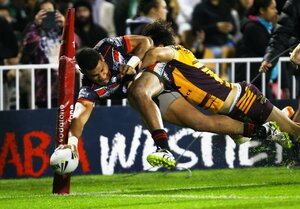 The Vodafone Warriors turned Horse Whisperers in their round 13 match-up
with the Brisbane Bronco’s running away with a 36-18 victory at Mount Smart Stadium.
Andrew McFadden stated during the week that the Warriors needed to have a more positive attack in order to increase the team’s confidence which will, in turn, improve their defensive efforts.
The Warriors were granted a free licence and they took it with both hands.
Right from Albert Vete’s first hit up you could clearly see that the team’s attitude had vastly improved.
The attitude and commitment from this team showed in this match has been something the fans have been begging for since the beginning of the season.
The Warriors no longer looked lost on attack, the forwards were chewing up the metres which let Issac Luke get a roll on from the play the ball, this caused the broncos to constantly be on the back foot.
With the forwards dominating Shaun Johnson finally got attack the line and be the devastating attack player that he is known to be.

Everything seemed to work for the Warriors in this game, most of the offloads stuck, they gave themselves plenty of attacking opportunities and after 21 minutes they were 18-0 up after some clever plays from Shaun Johnson scoring a try himself and setting Bodene Thompson up for another, Jacob Lillyman scored the third from a nicely placed grubber from Issac Luke.
The Broncos tried to get themselves back into the match with a try to Alex Glenn and before the end of the first half they had two tries pulled back for forward passes to go into halftime 18-6 down.
The Warriors have folded from here in the past but two minutes in the Warriors were over again through an amazing diving try by David Fusitua.
The Warriors scored three more tries through Ryan Hoffman, David Fusitua, and Solomone Kata and the Broncos could only manage two more tries to Jordan Kahu and Tevita Pangai but the Broncos were never in this match and were possibly lucky to only have lost 36-18.
The Warriors line speed was the best I have seen for month’s maybe even years, missed tackles were few and far between.
The silly errors and penalties that have plagued this side this season were gone.

My player of the day goes to Shaun Johnson, with the forwards doing the hard yards up front he had free reign in this game and he took full advantage, an attacking Shaun is a dangerous Shaun and the fans will be hoping that this version is here to stay this season.

Have things started to click with the Warriors?
Did Konrad Hurrell’s exit last week help realign this team as a unit and or perhaps the players only honesty session last week helped the players get onto the same page.
In all honesty I think it’s a bit of all of the above.
Whatever was said in the honesty session seems to have helped this team actually buy into what this club is trying to become.
Does this mean that the season is saved? No possibly not, this is just a step in the right direction but the team needs to continue to bring the right attitude each and every week.

The Warriors face the Newcastle Knights in Round 14 and even though the Knights have only managed one win season the Warriors cannot let their guard down, their current points differential is not going to do them any favours so they really need to put some big performances on to bring them into contention with the top 8.

Who were your key players in this victory?
What do think was the reason for this change in performance and is this a permanent change for the season?