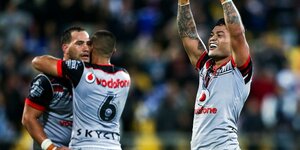 The Warriors travelled to Westpac Stadium in Wellington for their Round 7 clash against the Canterbury-Bankstown Bulldogs.

History has not been good for the Warriors in Wellington; however they did not let this affect them and came away with a hard-fought victory 24-20.


In front of a crowd of just over 18,000 the Warriors managed to bully the Bulldogs forwards into submission early on, Ben Matulino showed that he was returning to form as he was continually hard for the defense to bring down and his quick play the balls gave Issac Luke the opportunities to run out of Dummy half quickly and catch the markers sleeping.


Solomona Kata was unlucky as his two tries were disallowed, the first just 4 minutes into the game was ruled incorrectly as a forward pass and the second was an unfortunate knock on as a Bulldogs defenders shoulder dislodged the ball.

The Warriors continued to attack though and found the line through the returning David Fusitua and Blake Ayshford and were leading 8-0 23 minutes into the first half.

Just before Blake scored Roger Tuivasa-Sheck went off with a knee injury (More on that below) and Thomas Leuluai was brought into the halves with Tuimoala Lolohea being sent out to fullback.

The Bulldogs started to show some promise and took advantage of the personal change and cut through the Warriors defense with two quick tries to Sam Perrett to get the Bulldogs ahead 10-8, Kerrod Holland added a final try at the 40th minute to have the Bulldogs leading 14-8 at halftime.

The Warriors came out in the second half and showed to have adjusted to the on-field changes and scored again 6 minutes in with Jonathan Wright out leaping the Bulldogs to claim a Crossfield kick from Shaun Johnson, the remainder of the second half was majority in the Warriors favour as Lolohea crashed over for a scored from Dummy Half and Blake scored his second for the night taking the Warriors to a 24-14 lead, Kerrod Holland repeating his first half performance with another try in the 75 minute but the Bulldogs were unable to mount a comeback due to some poor last tackle options and they lacked the killer execution required to win.


Overall it was a very good performance from the Warriors, after last week’s lacklustre effort from the forwards they really showed up with some impressive runs straight out of the gate, this could always be due to the fact that the Bulldogs opted to have their premier props James Graham and Aiden Tolman start from the bench.

Bodene Thompson made a welcome return to the side and showed how much he was missed with strong defense and runs that had the defense second guessing themselves.

David Fusitua continued his top grade form, I cannot recall a bad game from him, let’s just hope that he does not get injured again as his attacking prowess is sorely needed.

Roger Tuivasa-Sheck has been ruled out for the season with a ruptured ACL in his left knee so the Holy Trinity is looking for a replacement and I think Lolohea is up for the task, now while it is a shame that we did not get to see how the Tuimoala half experiment would go having a player lie Thomas Leuluai there to jump in will help the Warriors in their quest to play finals football, Lolohea is an ideal replacement at Fullback and with continue to play the style he has played all year.


My player of the day goes to Bodene Thompson, as stated above the Warriors have really missed having him on the field, he is a hard working player renowned for his defense but he has been stepping up on attack this season and when he runs the ball he always seems to find a way to put the backs into open space and with a backline like the Warriors anytime they find open space the opposing team is in trouble.


My player who needs to improve was hard this round as I could not really find a player that played poorly so I am going on stats alone and picking Charlie Gubb, Charlie missed 4 tackles and only made 75 metres, the Warriors need a player like Charlie on their bench to bring some aggression into the game but if he continues to miss tackles like this they Warriors would be better suited to bring James Gavet back into the fold.


After this win the Warriors are heading to Melbourne for the always special Anzac day clash, as is the case most years this is the game of the round as both teams seem to bring their A-game.

The Warriors don’t have that bad of a record versus the Storm and have tied the Storm in games played at AAMI Park with both sides winning 3 apiece.

The Storm won the round 3 clash 21-14 but I see the Warriors coming away with the victory by at least 10 points this round, this team is gaining confidence and are on their way to the top 8.


If you like what I’ve written or disagree let me know, I would love to discuss anything Warriors related in the comments, share it with your friends on Facebook too as I want to get this out to as many people as I can and I know there are so many loyal Warriors fans happy to chat on there.


Hopefully, I will be writing about the Warriors being victorious next time but until then enjoy the game tonight and talk later.
Reactions: eudebrito and Straight up
About author