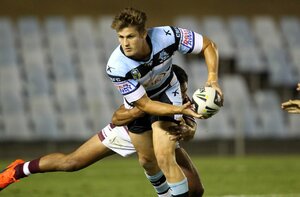 You often hear coaches talking about a good mix of youth and experience. Having the right balance is so important these days.

Youth brings enthusiasm and eagerness and it seriously helps keep the salary cap in hand. Experience defines club culture, attitude and is what a team turns to in times of need. Get that balance right and a club is well on the way to playing finals footy.

But it isn’t just in that area that a rounded roster needs balance. There should be a balance between attack and defense, between flair and toil and personalities as well.

The Warriors just announced the signing of former Tigers and Sharks centre Blake Ayshford on a two-year deal. Ayshford has struggled to make the first grade side with the Sharks and immediately a number of Warriors fans pointed to another failed Aussie import and labeled the signing a waste of money.

For far too long the Warriors administration and their fans alike have simply compared players individually. Is Ayshford a better player than Konrad Hurrell or Solomone Kata? They get their answer and select their side based on picking the best player head-to-head. But that type of selection is flawed. To have the right balance a coach must select his side based on who would provide the right fit alongside other key players. The Warriors have dazzling play-maker Shaun Johnson returning from injury and have signed attacking stars Issac Luke and Roger Tuivasa-Sheck for 2016. That spine provides significant attack and would be compromised by having too many players like Hurrell or Kata alongside them in the back-line. They need players that will not be a liability at the defensive end of the park or when the Warriors don’t have the ball. Ayshford has those qualities over Hurrell and Kata. If you lined the three players up in order of individual quality, Ayhsford might find himself at the bottom of the list but he will be the player that will make the Warriors side of 2016 play a better brand of football of the three.

The Warriors have the makings of a pretty decent side next year. Chief executive Jim Doyle made it clear the Warriors are likely to add another couple of players of the same ilk as Ayshford in the coming weeks. One is almost certainly going to be a front-rower and the other either a half or another outside back.

A Warriors back-line with Johnson at halfback and Thomas Leuluai at five-eighth, Ayshford and Tui Lolohea in the centres, Manu Vatuvei and Jonathan Wright on the wings and Tuivasa-Sheck at fullback is starting to look a useful one. Lolohea can play almost anywhere, which gives coach Andrew McFadden plenty of options but his ability to scoot out of dummy half early in a set could be a major plus for a Warriors side that has been light in that area since Brent Tate departed.

While the line-up listed above doesn’t have the same excitement to it that one containing Hurrell, Kata and company might, it has a much more consistency and balance to it. There is plenty of flair in Johnson and Tuivasa-Sheck and power in the form of Vatuvei. More importantly it would be a back-line that wouldn’t be a liability at the defensive end.
About author
Play The Ball
This article has been written by Dale Budge. Dale is a well known rugby league commentator and journalist, having covered the sport for over 10 years.