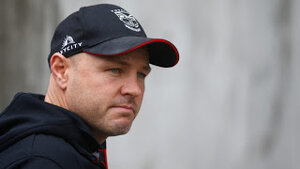 ​
It's time to go back to basics with team selections. We've seen too much tinkering and experiments with the 17 that are being selected during the 2016 season. Far too often we've seen a bench include not only a utility but also a back, which to me is a selection based on "what if's" instead of what is best for the side. There is a reason we don't see NRL teams opt to go with a back on the bench and that's because it simply does not work. When it's combined with a utility player on the bench it makes the decision even worse.


Considering the Warriors have been renowned for their lack of fitness over the years and with the reduced interchange in 2016, running with a back on the bench only serves as reducing the breathers we are able to give our big men. Not to mention that unless injury strikes, the only way to inject a back into the game is to hook one that's starting. To me that's a waste of a substitution and serves little to no purpose.

What happened to the good old days when you picked your best 13 to start and worked your bench around that?

A prime example of not selecting your strongest 13 to start is the persistence in picking Matulino on the bench. Here we have a guy who last season won the Warriors most prestigious player award (Player of the Year), the second time in only 4 years he has managed to do so. Matulino has been talked about by many experts and fans alike as one of the premier props in the game and it wouldn't be stretching the truth in the slightest to suggest that not only would he have been in the top 3 at different stages over the last few seasons but the best prop in the game.

Was Ben starting from the bench when he was being spoken about as one of the premier props in the game? Ofcourse not. He was a regular starter and one of the first names picked week in and week out. So why do we insist on picking him as a reserve?

I understand that there are a multitude of reasons behind such decisions but when you've got a player of this caliber in the team you start him, regardless of how good the reasons you think you have to play him from the bench are. His form is clearly down compared to previous seasons and from the outside looking in the only thing that has changed is how he is being utilised in the team. Whether his benching is affecting his confidence or whether he is struggling to adapt to the pace of the game when it's 20 minutes old is a question only he can answer but it's clear for everyone to see that he isn't the same player when he isn't a starter.

There have been numerous occasions throughout the course of the season where we've struggled to match opposition teams through the middle, a battle that often decides the outcome of the game. The reason for this is because we simply don't have the muscle sitting on the bench to win the arm wrestle. Against the Raiders on the weekend, who have one of the biggest packs in the comp, we gave up almost 40 kg's on the bench alone.

With the current crop of players we have, it's of my opinion that we don't need a utility player on the bench and we certainly do not need a back on the bench. Personally i believe we should be going with 4 forwards on the bench giving us the ability to keep hammering away against the opposition forwards who would be playing extra minutes and tiring quicker than what ours would be.

​
Tui also needs to start without question. Unfortunately the person that probably loses their spot would be Ken Maumalo. Although Ken hasn't done a great deal wrong and probably deserves to keep his spot it cannot be at the expense of Lolohea. This also creates more variety within our back 3 as currently we are a little bit too one dimensional. With the inclusion of Tui this also makes the decision to go with a 4 man bench the right decision as it offers us more cover in positions should anybody succumb to injury.

While it's not ideal to shuffle the side during the course of a match, it is even less ideal to select a side that has players included to only come on the field in case of injury. With a NZ international hooker currently playing 5/8, props who can make the switch to back row, back rowers who can play centre, centres who can play on the wing, a winger (if Tui was to take Kens position) who can cover anywhere from 1-7 and a fullback who can cover wing and centre, we have enough options to offer a band aid solution that get's us through the game should a scenario present itself that forced our hand.

It's time we simplified the selection process, start by picking the best players to fill 1-13 and the rest will fall into place.

Amen Bro!
Very good post bro, the Warriors is probably one of the only teams who could carry a 4 man forward bench. Tui can slot in the halves during a match, so that's covered, tommy into hooker for bully so that's covered, Simon to cover centre spots, starting centre moves to wing to cover that as well. If they are going to play this style they must dominate the middle every game.

This weeks side is possibly the best 13 players at Cappys disposal and having Blake on the bench is just ridiculous. Carrying a hooker is more effective to give bully a spell.
Really good post bro...well thought out.I agree because the Penrith forwards can be really dominant ...they smashed us last time and smashed Brisbane last week.
Defensive line speed needs to be quicker to pressure the forward pack and halve's.
More size on the bench (Sipley?) is needed.

Nesio McCarthy said:
Very good post bro, the Warriors is probably one of the only teams who could carry a 4 man forward bench. Tui can slot in the halves during a match, so that's covered, tommy into hooker for bully so that's covered, Simon to cover centre spots, starting centre moves to wing to cover that as well. If they are going to play this style they must dominate the middle every game.

This weeks side is possibly the best 13 players at Cappys disposal and having Blake on the bench is just ridiculous. Carrying a hooker is more effective to give bully a spell.
Click to expand...

I just cannot understand the constant selections of backs on the bench, it does my head in.