You are using an out of date browser. It may not display this or other websites correctly.
You should upgrade or use an alternative browser.
Match reports from Auckland Rugby League Premiership matches played on May 11.

Howick picked up their fifth win of the year on Saturday, but had to survive a late scare from the Pt Chevalier Pirates. The Hornets led 22-8 with three minutes to go, before the Pirates struck twice to draw within two. Carlos Hotene scored a double for Howick, while forward Nick Wilson was strong off the bench.

The Mt Albert Lions turned a 14-6 lead at half-time into a comfortable victory over the Papakura Sea Eagles. Prop Sala Falelua-Malio was a standout for his side, laying a solid platform, while Eiden Ackland led the team well in the halves.

A hat trick to Kakoi Togoiu helped the Richmond Bulldogs secure a come-from-behind victory at Walter Massey Park. Down 22-12 at half-time, a try inside the final 10 minutes, which was converted by halfback Chedyn Mani, got the Bulldogs over the line for the two competition points.

A dominant performance from the Glenora Bears’ forward pack saw them to a convincing victory over Bay Roskill. The Bears struck in quick succession in the opening half hour, with prop Soape Kavaliku setting up and scoring a try. The Vikings were much improved in the second spell, but couldn’t find a way back into the contest.

Otahuhu ran out comfortable winners over Manurewa at Mountfort Park, helped along by doubles to Setu Tu and Nono Ngaa. The Leopards led narrowly at the break but were too strong in the second spell.

Northcote remain undefeated at the top of the ladder after getting past a determined Marist at Murray Halberg Park. The Tigers led 16-6 at the break, but Marist clawed back to within six in the closing minutes, before a Cole Waaka field goal sealed the result.

A last-minute try to Fred Safata saw New Lynn to victory at Lawson Park, after the Stags had trailed 12-10 at the break. Sese Siale was a standout for New Lynn, scoring a double, while hooker Tyren Carden was valuable in defence.

Four tries to fullback Nehumi Tu helped lift the Hibiscus Coast to a win over Pakuranga at Ti Rakau Park. The Raiders led 18-6 at the break and then piled on the points in the second spell. Props Adam Davies and Ferninand Gerber were standouts for the Raiders.

The Ellerslie Eagles secured a convincing win over the Ponsonby Ponies at Victoria Park. Up 24-6 at half-time, the Eagles were too strong in the second stanza. Jordan Schaumkel earned praise for his impact off the bench.

A spectacular 90-metre runaway try from winger Roydon Tupea gave Pukekohe a last-minute victory over Waitemata. Down by four with a minute to go, Tupea crossed under the posts, with the ensuing conversion handing Pukekohe the win. Earlier Waitemata had dominated large periods of the match at Karaka Sports Park.

Te Atatu ran out big winners over Papatoetoe to remain top of the table in the Championship. The Roosters’ young forward pack laid a strong platform, with winger Anthony Goulton starring off the back of it.

A hat trick of tries to centre Taunga Arama did much of the damage for Manukau in their victory over Otara. The Magpies led for the whole game but had to survive a late Scorpions comeback, which saw them reduce the gap to 10 with as many minutes to play. 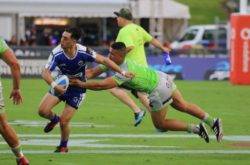