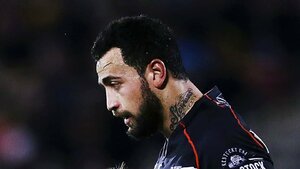 If Ben Matulino had punched Dragons five-eighth Garreth Widdop in the face instead of his borderline shoulder charge he would have received a lesser punishment.

Matulino has been charged with a grade 2 shoulder charge after the weekend’s loss to the Dragons. If there was ever an example of the NRL completely over-reacting to a rule change this is it. Last week, Matulino wouldn’t have been charged for his hit because it wasn’t high or late. This week however, after threatening to crack down on shoulder charges, Matulino is facing a minimum of three weeks on the sidelines or potentially five weeks if he fights the charge and loses.

This is absolute inexcusable madness from NRL headquarters. I’m all for banning shoulder charges and support the NRL for trying to get them out of the game but Matulino’s hit on Widdop was debatable as to whether it was even a shoulder charge. The Warriors second-rower threw an arm at Widdop at the same time he made contact with his shoulder. It may have warranted a penalty during the game at most though the match review panel obviously have been instructed to send a message and do away with any concept of common sense.

In the same game, Warriors skipper Simon Mannering was penalised for a high tackle. It wasn’t a bad example and the penalty on the field was deemed sufficient – just like countless others across the season. Why do shoulder charges not get the same treatment? In Origin 3, NSW prop James Tamou hit Jacob Lillyman high with a swinging arm and, in case the first blow didn’t do the job, came back with a follow-up clenched-fist swinging arm to the face. How that act couldn’t have been described as intentional is beyond me – instead he gets a one week ban. When you compare that to Matulino’s tackle, fans are left scratching their heads.

The reality is a shoulder charge carries a stiffer penalty than a striking charge. So an intentional punch isn’t as bad as a shoulder charge? The NRL’s charge/grading sheet needs a major overhaul as it has completely lost touch with what the sport is about.

The Warriors should challenge this charge and if he’s found guilty at panel they should seriously consider civil action. There is absolutely no consistency with the way NRL deals with judicial matters and it simply leaves fans feeling confused and angry – surely not the reaction they were looking for in trying to clean up the sport.

Reactions: eudebrito
About author
Play The Ball
This article has been written by Dale Budge. Dale is a well known rugby league commentator and journalist, having covered the sport for over 10 years.