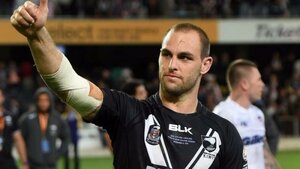 Veteran New Zealand Warriors back-rower Simon Mannering has today announced his retirement from international rugby league, ruling him out of contention for the Kiwis’ one-off Test against England at the Mile High Stadium in Denver on Saturday, June 23.

After representing the Kiwis in 45 Tests since his 2006 debut, the 31-year-old said the time was right to step aside.

“Going into the World Cup last year I sort of had it in the back of my mind that it would be my last campaign playing for the Kiwis,” he said.

“It still doesn’t make it an easy decision to make it official even though my days of being selected in the team are getting behind me.

“The idea of taking a Test to the United States is great for the game and it’s exciting for younger players to be given an opportunity that I wish had been around when I started.

“I was honoured to wear the Kiwi jersey every time and it’s been a huge privilege having the chance to play alongside so many outstanding players. It was also a special honour to captain my country.

“There have been so many great memories along the way like being involved in the World Cup win in 2008 and also the Four Nations victories in 2010 and 2014 but now I want to be able to focus on the Vodafone Warriors who have supported me throughout.”

Mannering finishes with 45 Tests, fourth-equal on the Kiwis’ all-time list with Stephen Kearney and Adam Blair behind Ruben Wiki (55) and Stacey Jones and Gary Freeman both on 46.

“Simon is such a wonderful player and person and he’s had an outstanding career with the Kiwis,” he said.

“This decision emphasises once again how he always puts others before himself.

“I’ve had the pleasure of working alongside him with the Kiwis and now at the club and he’s just tremendous in what he brings to every team he’s involved in.”
About author