You are using an out of date browser. It may not display this or other websites correctly.
You should upgrade or use an alternative browser.
If the Warriors’ Board had made a couple of different decisions a few years ago Nathan Cleary could well be displaying his talents at Mt Smart Stadium every week, rather than Pepper Stadium in Penrith. (Main photo: Tuimoala Lolohea fends away Nathan Cleary. Credit: photosport.nz).

Had dad Ivan been kept on as head coach of the Warriors it’s probably safe to assume young Nathan would have come through the U20 system in Auckland, and by now could be helping a different team in their quest to make the NRL top eight.

Assuming that happened, his path to a long-term career in the halves would potentially be blocked by Tuimoala Lolohea, a talented playmaker in his own right who has a mortgage on the club’s No.6 jersey once Thomas Leuluai departs at the end of the year.

After watching Cleary and Lolohea go about their business for their respective teams in a thrilling contest between the Warriors and Panthers last week, it raised an intriguing question; if both were at the club wanting to play in the halves, which one would you keep and which would you let go?

Check out their season averages for some of the key categories below. 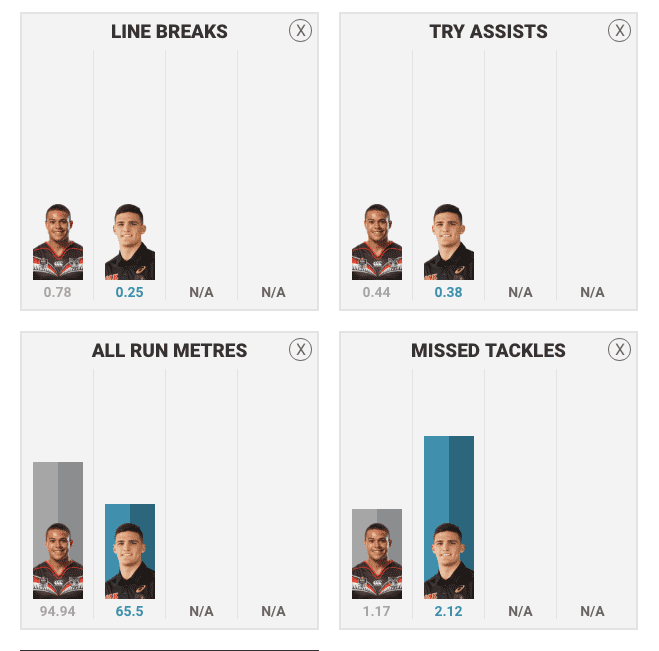 In Lolohea you have undoubtedly the better athlete. He’s fast, dangerous when he takes on the line and this year averages 94.9 metres gained per match, with 14 line breaks in 18 games.

But Cleary in his eight games to date has shown signs that he will be a top-flight NRL half in years to come. He directs play well around structure, has a strong kicking game – long especially – and has something very few rookies possess; genuine composure on and off the ball.

He has set up three tries, scored a couple himself and averages 10 kicks per game as the dominant half for Penrith right now.

Both players are undeniable talents, and should star in the NRL for a number of years to come.

If you had to pick between Cleary or Lolohea right now who would you keep around? Give us your thoughts on Facebook and Twitter.