Lolohea the No.1 man for Warriors and Kiwis

Seven days ago Tuimoala Lolohea was preparing for a major positional change from the wing to five-eighth, and following Roger Tuivasa-Sheck’s season-ending injury he should be getting ready to do it again, with eyes on a permanent move to fullback.

While Warriors coach Andrew McFadden said last week that he was committed to developing Lolohea as a half in 2016, news of Tuivasa-Sheck’s ruptured ACL changes everything.

The club now have an urgent need for a No.1 who can offer playmaking ability at the line, coupled with safety at the back defensively, and 21-year-old Lolohea can deliver that.

There are other options at the club currently – Henare Wells is a specialist fullback who has excelled at reserve-grade level, while David Fusitua is no stranger to the position either – but Lolohea would be the best fit.

The fact that he already has an intimate understanding of the Warriors’ attacking philosophy goes a long way to ensuring a smooth transition, which will be crucial considering the Kiwi side have no time to waste in regards to getting consistent results. 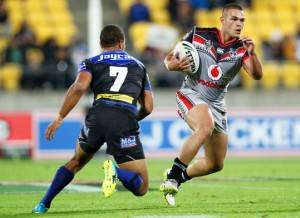 Lolohea played a big role for the Warriors in the Round 7 victory over the Bulldogs. Photo: photosport.nz

After slotting into fullback around the 15th minute last week against Canterbury-Bankstown Wellington, Lolohea performed admirably, running for 156 metres, scoring a try, setting one up and breaking the line twice.

While that is a small sample size, Lolohea also looked comfortable in stints at fullback in the club’s NRL squad last year. He can get involved plenty at both first and second receiver from the back, and will get ample opportunity to take the line on.

It does leave a hole in the halves for the Warriors, but Thomas Leuluai is more than capable of filling that, albeit without the ball-running threat Lolohea would bring.

Dare I say there is also a player named Jeff Robson at the club who can play in the halves, and who probably hasn’t been quiet as bad in 2016 as many will make out.


Terrible news about Roger Tuivasa-Sheck .. One of the game's real draw cards .. Come back bigger and stronger next year young man!

Guttered for the uce @Tuivasasheck wishin u a speedy recovery, you'll be back in no time!

If Lolohea is to become the new custodian at the Warriors it makes Stephen Kearney’s decision around where to go with the Kiwis a simple one as well, given the Marist Saints junior will be the only active New Zealand fullback in the NRL.

While there is a long list of centres and wingers who could get the job done at the back for NZ, it’s always better if you can select a guy who plays there at club level.

Historically Australia have punished inexperienced Kiwi fullbacks in mid-year Tests, and they simply can’t afford to go into the match with a weakness in that position.

There have been calls all year for Lolohea to play a more prominent role in the Warriors, so let him do it now, but in the No.1 jersey rather than the No.6.


This article first appeared on http://www.kiwileaguecentral.com
About author