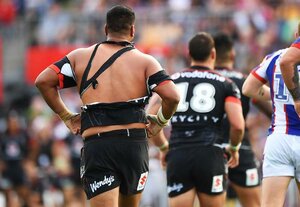 Warriors prop Sam Lisone has told kiwileaguecentral.com details of happened in the lead-up to the scuffle between himself and former Junior Kiwis teammate Danny Levi, which erupted in the closing minutes of Sunday’s match between the Warriors and Knights on Sunday.

An initial push and shove involving Ken Maumalo and Jamie Buhrer quickly grew to involve most of the 26 players on the park, with Lisone and Levi at the forefront, resulting in Lisone’s shirt being ripped to reveal a new hulk-inspired look.

“There is no bad blood, we left it all on the footy field, I just thought I saw him (Levi) collaring Kenny (Maumalo) so I ran in,” Lisone told kiwileaguecentral.com.

“Danny is all good, we are real good mates who go way back…we grew up playing footy together.

“We played Junior Kiwis together (in 2014) and back before that with New Zealand Residents and everything.

“We talked about it afterwards.”

You can watch the exchange near the end of the video below.