Kurt Sorensen Q and A 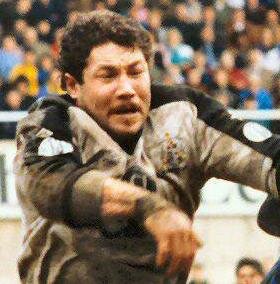 If you want to play for the Kiwis before your 19th birthday you better have a special toughness about your personality. Kurt Sorensen had plenty of it, and these days along with brother Dane is credited for paving the way for other Kiwis to make a living out of playing rugby league in Australia. kiwileaguecentral.com catches up with Kurt to talk off-field antics, the old days and being a trailblazer.

I work in the mines all over the place in Australia, doing construction work mainly, and I spend a lot of time in Western Australia. My home is on the Gold Coast and I have three children aged 29, 28 and 25 and they are all over in Sydney.

And what role does league play now?

I work with a good friend of mine called Charlie Burkhardt who has been an avid league fan for a long time and is on the cause of getting an NRL team over to Western Australia for a long time now, so through him I have become an advocate of that.

I am also involved in Maori rugby league over here, I am a patron of that and am trying to get it going as well. It is growing and there is a lot of potential. I get out to NRL games whenever I can. I get involved with a bit of coaching when I can too.

Some players from your era don’t enjoy the way the game is played these days, is that the same for you?

Like everything else it evolves and changes. But the main thing is it is still a very basic game and all the same values and that still apply. But it’s just a lot faster now and I guess a bit robotic, and a lot of the characters are taken out of the game, mainly due to the rules. But I still love the game.

That just seems to be the way bloody sport is going. A lot of people go back to the past and characters in the past. It’s a totally different game so it’s hard to compare, but it did seem that people had more fun back in my day. 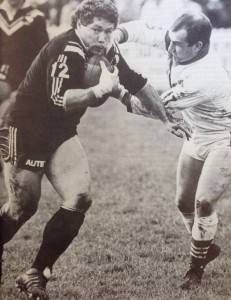 Kurt Sorensen in action for the Kiwis.

Yeah, it was a hard competition back then, there were a lot of characters playing and I remember coming up against some hard men as a teenager. It was hard but I guess that is what makes you the player you are.

You played together in the same teams as your brother Dane pretty much from the moment you started playing league at Mt Wellington, what were those early years like?

Dane is the year older than me so it was easier for mum if we were in the same team, so I always played a year up. We were very lucky that we were under the guidance of a Maori coach named Tom Newton, we credit him for much of our success. We thought he was well ahead of his time, but the main thing with him was that he just went over and over the basics of the game with us, so in the end they were like second nature to us.

These days the Sorensen brothers are widely credited for paving the way for guys like Shaun Kenny-Dowall, Kieran Foran and Dean Whare to make a living out of rugby league in Australia. You were among the first – and more importantly the most successful at the time – to do it, but did you realise you were trailblazers at the time?

Probably not, probably not as much as we really were. You don’t always realise those things when you are doing it, but you look back now and realise you did that; you were a trailblazer for the rest.

We always knew that once we made the Kiwis there was only one stop after that, and that was to go and prove yourself against the best. We always knew we would end up there.

There weren’t many Kiwis over there at the time, it was all about Australia, they were no.1 and anyone else was second rate. The Poms were much more highly rated than Kiwis at the time. We weren’t seen much.

That’s when we had to earn our respect, and I guess we did. That was very satisfying, you grew up believing that Australia was the best and it was all about them, but when you started knocking them round and they started acknowledging you, well you knew you must be doing something right.

I think we probably copped some ‘special’ treatment from opponents in games, but that probably defines you, how well you come back. You come back double and see what they come back with then. 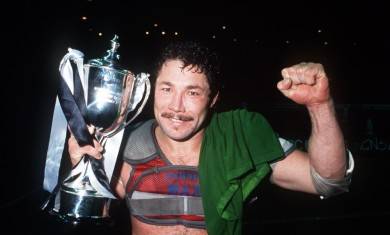 Kurt Sorensen with another piece of silverware at the Widnes Vikings. Credit: widnesvikings.co.uk

Back then you got away with plenty on the field and off the field, how crazy was the social life in the NSW league scene in the 70s and 80s?

I think I would have to put a no comment on that one (laughs). The things we used to get up to in the 1970s and 1980s you wouldn’t want to repeat. It was just a different world, you were allowed to do a lot of things then that you can’t do now.

But that was all part of it, everyone was still working and we were just happy to be playing football as well.

When you think back to what you got up to in those times and compare it to what some players get in trouble for these days do you sometimes have a bit of a chuckle to yourself?

Very much so, very much.

A lot of us from the old days get together and talk about it and just shake our heads. We know the stuff we used to do, if they found out about that these days then we would all be in jail.

I think that is half the problem with these guys who get into trouble, they are still human beings that have feelings and desires, but it has changed because they are getting so much in their back pocket now that they have to behave themselves; that’s just the way it is.