You are using an out of date browser. It may not display this or other websites correctly.
You should upgrade or use an alternative browser.
Check out the latest news involving our Kiwis playing league outside of New Zealand and Australia in 2020, with kiwileaguecentral.com’s wrap of the action from around Europe.

It was one of the most-anticipated rugby league comebacks on record, but Sonny Bill Williams was helpless to prevent his Toronto Wolfpack from suffering a heavy 28-10 defeat at the hands of Castleford in their first ever game at Super League level.

The 34-year-old played 54 minutes – far longer than originally planned – off the bench at the brand new Headingley ground in Leeds, rebounding from an early error to show enough glimpses to suggest he still has plenty to offer in the 13-aside game.

Earlier in the week the 2020 Super League season got off to a roaring start with 12-man Warrington making Wigan work right to the death for a 16-10 win.

Veteran Kiwi half Thomas Leuluai had a good game for the Warriors, but the most impressive clip of the day belonged to Otahuhu Leopards junior Ben Murdoch-Masila, who trampled Wigan prop George Burgess for the first try of the new season.

In the second-tier Championship, Auckland-born Scotland rep James Bell (pictured) started at lock for Toulouse Olympique in a 22-10 win over York. 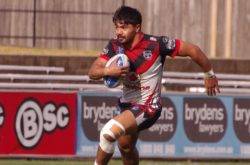