You are using an out of date browser. It may not display this or other websites correctly.
You should upgrade or use an alternative browser.
Check out the latest news involving our Kiwis playing league outside of New Zealand and Australia in 2020, with kiwileaguecentral.com’s wrap of the action from around Europe.

With Sonny Bill Williams back in New Zealand for the birth of his fourth child, Toronto battled on without their star recruit and ended up putting in their best performance of the season.

One-time New Zealand Warriors forward Bodene Thompson scored one of the Wolfpack’s two tries in an eventual 32-10 loss to Wigan, who had Thomas Leuluai and Auckland-born Willie Isa in their starting side.

O'Brien breaks to set up Thompson

Former Junior Kiwi Carlos Tuimavave scored a try for Hull FC, but couldn’t help his side avoid their first loss of the season.

Kiwi-laden Huddersfield continued their perfect start to 2020 with a grinding 12-10 victory over last year’s runners-up Salford.

The Giants have former Kiwi international Suaia Matagi in their squad, along with fellow Auckland products Ukuma Ta’ai and James Gavet (pictured).

Across in the south of France James Bell crossed for a try in Toulouse’s victory over Sheffield. 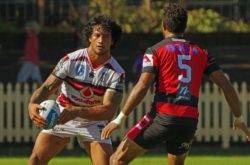