Struggling to find the building blocks for your NRL Fantasy squad? Here are five New Zealand players you need to have in your team.

Not just the best Kiwi NRL Fantasy player last year, but the best in the entire competition, with his 1,436 total points edging out Cameron Smith for top spot. Mannering plays 80 minutes most weeks and has excellent base stats thanks to his whopping tackle counts. Add to that the fact that he likes to offload and misses very few tackles and you have a great back-row option. The Kiwi international’s consistency also makes him a popular choice for captain.

Comes off a great season for the Roosters on the field and on the NRL Fantasy front, finishing as the top winger/fullback. Has proven he is capable of running for plenty of metres – averaging 241 last year – while he also has points in him from tackle breaks and tries. Will be hard pushed to repeat his heroics from last year with a new team this season, while his $505,000 price tag is also an issue, but ‘RTS’ should still be in the mix to be a top Fantasy player. 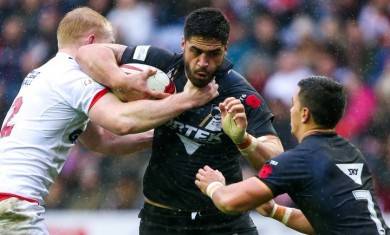 Jesse Bromwich in action for the Kiwis against England. Credit: photosport.nz

The Kiwis Player of the Year runs lots, for lots of metres and does it every week. Shapes as a great option with the interchange reducing, given he is more than capable of playing bigger minutes in the middle of the park. The other major upside is he doesn’t miss games often, last year playing every match for club and country. Had a couple of low 30 scores to start last season, but by the end was averaging 52.6.

A good chance of starting in the South Sydney backline come Round 1, at $139,000 Auva’a is just above rookie price but comes with a proven track record on the Fantasy scene, having been a quality cash cow in his rookie season in 2014. He averaged 33 points a game that year, and even if he isn’t in the 17 at first Auva’a is almost certain to get a shot at some point in the season and experience some price jumps along the way.

Another who starts the year at near basement price, Henry’s average scores dropped off last year thanks to limited minutes and injury struggles. While he only managed 17 per game on average last season, a year earlier he was up at 37, suggesting he has plenty to offer if he can stay fit. Unlikely to start in the back-row given the depth the Warriors have, but could come off the bench and make some impact at centre, hooker or in the forwards. A solid cash cow option and is listed at both centre and second-row forward in Fantasy.