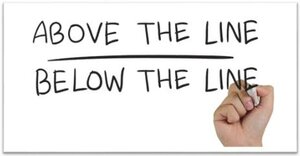 If it wasn't bad enough for the long suffering fans of the NZ Warriors having to deal with the clubs tired and old slogan of "Keep the Faith", which let's face it, is nothing more than a phrase that breeds an acceptance of mediocrity within the establishment, Mr 24% decides to bring his own catch phrase to the table, "Trust the Process".


Let's not forget about the "Above the Line" slogan he also brought with him. Now i'm not sure where this line sits in the big scheme of things so i can only assume it doesn't actually have anything to do with the team and the players individual performances as previously thought. Unless of course it was intended to be forwarded on to Kidwell and used as a motivation tool for the Kiwis. In which case it has worked as hoped judging by Bromwich, Proctor and SKD being over the line for the first time in their lives. I guess they didn't get the memo about not actually snorting the line they were above.


From the outside looking in this seems to be the move of a man who is lacking confidence in his ability to perform at an elite standard in the role he has recently taken over, a move that seems to have been put in place by Mooks to cover his arse should results not go his way and in doing so giving himself a safety net or safe space if you will, away from the inevitable criticism that shall follow.

Now don't get me wrong here, I'm all for shiny new things, so long as they're an improvement on its predecessor. Sadly, in this case, Kearneys new words of wisdom are nothing more than a sideways move away from the big bag of unnecessary that is Keep the Faith. Coincidentally, Kearneys appointment as head coach was nothing more than a sideways move in replacing Cappy but that's a story for another time.

The other important thing to remember when claiming to bring fresh and new ideas to your new place of employment is to ensure that they are in fact fresh and new ideas and not stolen from somebody else, which unfortunately is another example of where Kearney has failed again.

Exactly where Stephen came up with his motto regarding the process is up for debate, here are a couple of the more popular opinions as to where it came from;


When pressed about whether losing was in fact part of the process as it was with Hinkie in the NBA, Kearney replied by saying "being able to process the processes process is the first process to processing the process".


An unusually rushed and hurried Kearney then quickly turned to head back into the sheds when unexpectedly a gimp mask fell from his bag and onto the Mt Smart Turf..

"I suppose you are going to want to know why i am carrying around a gimp mask? Look, i am a grown man, i really am a big boy and as a big boy i have desires and needs."

It was at this stage where I was looking for an escape before being caught in conversation with Mooks and his fetishes.

"It's going to be really positive for the club moving forward and the best part is i get to play one of my favourite games from when i was a kid. Without giving too much away let's just say that Ligi is yet to be made aware that by the end of the bonding session he will be one very soggy sao"
About author