Unless you were an avid follower of the Junior Warriors over the last couple of years you could be forgiven for not knowing who Jazz Tevaga was when he was called up to make his NRL debut in Round 3 this year.

His rise was so rapid he didn’t even rate himself a chance of making first grade this season. In fact, when coach Andrew McFadden told him he was in the squad Tevaga swore out of shock.

We sat down to learn a bit more about the man.

How did it all start for you in footy, Jazz?

The first pair of boots I laced up was in Christchurch with the Burnham Chevaliers, with Kodi and Jayden Nikorima at the club as well.

But then I moved to Papakura and that’s kind of where my league took off. I went through the ranks and then discovered my potential.

What’s the story behind your name? Is it short for something?

Dad just loves music and is a big fan of jazz music. He thinks it’s a cool name, so that’s how I ended up with it. A lot of people think it’s short for Jazmine. They pull my leg about it, but it’s just Jazz!

You were a lock all through the junior grades, but now you are being used predominantly as a hooker, tell us about the switch.

I was a lock all my life and just this last pre-season Cappy (McFadden) tried to transform me into a hooker, probably mainly because of my size. Being a lock you have got to be quite big.

It has been hard but good, I like the hooker position. 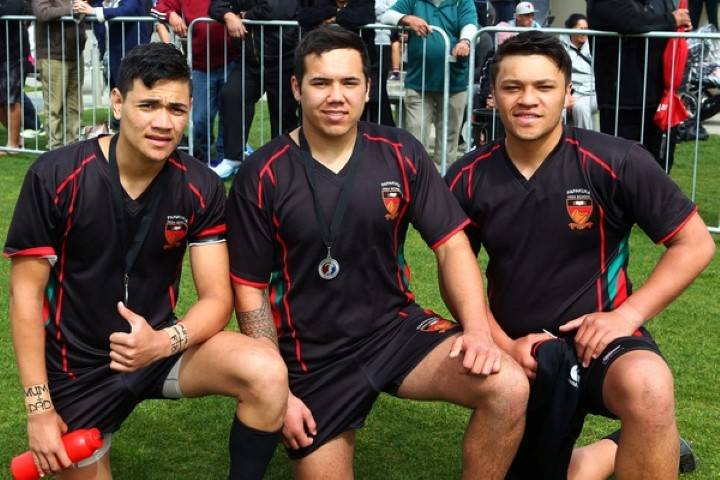 Tevaga (middle) with some of his Papakura High School teammates at the 2012 National Secondary Schools Tournament. Photo: photosport.nz

How have you had to adapt your training this year then?

I had to add a bit of bulk and do more stamina work, because being at hooker you have to do as much work as a lock while also passing and following the ball.

Your mum Melissa is your biggest fan on social media, how has it been for her seeing you crack the NRL?

Who were your rugby league idols growing up?

Shaun Johnson, Sonny Bill Williams, Sam Burgess. All of the Kiwi boys too, and it’s good to finally play with them; a dream come true.

Did you ever think you would be playing NRL this year?

I kind of set my goals realistically, I didn’t think I would be in the picture for a first-grade debut this year. I set my goals to play the next couple of years in the NSW Cup and hopefully progress from there into NRL. The opportunity came a little earlier than expected, and I took it with both hands obviously.

If you look at your two positions, lock and hooker, the Warriors have representative players everywhere in those spots. Even at hooker you must have looked and saw Issac Luke and Thomas Leuluai there and figured playing No.9 would be out of the question?

Yeah, that’s exactly right. With Tommy and Bully (Luke) there I thought there would be no chance. But injuries happen and that is part of the game, and me and Nate Roache were happy to step up.