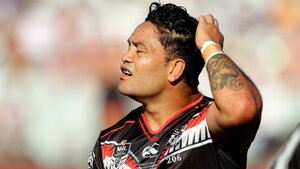 Kiwileaguecentral.com caught up with Kiwis hooker Issac Luke for a one-on-one chat ahead of the 2016 Four Nations final at Anfield.

KLC: The draw with Scotland was a huge shock result, but have the camp been able to take any positives out of it ahead of the final?

IL: 100 per cent there were some positives to take out of it. We have got to give some respect to Scotland for an outstanding game, and there are a lot of things we took out of it which we thought we did well.

But then again there was a negative side as well. But that is why you train, to try and fix all those problems. They adapted to everything a lot better than us.

If Tohu Harris plays five-eighth in the final, is he someone who can fit into the current system there?

Yeah Tohu Harris has got great vision in his attack and he is a great defender as well. Whoever ‘Kiddy’ (coach David Kidwell) puts there we have 100 per cent trust in that.

New Zealand haven’t really started a Test well all year, how important is that going to be v Australia?

It’s not just the start, it’s an 80-minute game so if we can manage to share possession with Aussie then we will give ourselves the best possible chance.

I think the last time we played them we had a little 10-minute period there which just worked and that saved us a bit. But we have got to work on holding the ball and limiting our errors.

Andrew Johns, among others, came out and criticised the Kiwis following the Scotland result. What’s your view on that?

I guess it’s well and good to say that from a TV, but it’s different when you are actually here. He is one of the greats of the game, has a lot of knowledge and what he said may stick with some people or it may not.

I am sure the boys have read it, but we have just been focussed on this week and what we can do.

Internally have there ever been any concerns about the attitude of the side at the Four Nations?

Na not at all, I mean people could probably challenge our culture, but that is what we grew up with, that is who we are.

Something similar happened at the New Zealand Warriors this year with Graham Lowe’s “bro culture” comments. Is that frustrating as a player to have someone from the outside saying stuff like that?

Not really, those are all just words. They don’t actually come into camp and find out for themselves what it is like before they say these things.
About author