Is It Time For Personalised Numbers? 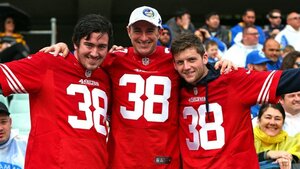 The phenomenal interest in Jarryd Hayne’s rise through the NFL pre-season and his potential regular season debut has got me thinking.

Hayne hasn’t even played a down in anger in the NFL yet Australia is already crying out for more #38 San Francisco 49ers replica shirts. His numbered-shirt is among the fastest selling NFL shirts in the US at present as well.

The idea of having personalised playing numbers is nothing new – Super League used the concept in 1997 but the fad didn’t catch on. Players tended to stick to the numbers of the positions they generally played. UK Super League currently operates a personal number system rather than using the traditional numbers that determine a player’s position.

When you look at the number of changes NRL sides make after the teams are named on Tuesday afternoons and compare that to the side that runs out onto the field – the numbers don’t match up all that often to the position they are actually playing anyway. Has the time come to try and capitalise on individual star’s pulling power and introduce individual numbers for each player in the competition much like the NFL or NBA does?

Surely having personal playing numbers would see a significant increase in jersey sales and would add to the marketability of the game’s leading players. You could even go as far as allowing clubs to retire the numbers of their greatest players.

As always, let me know your thoughts via the Twitter handle @playtheballnz
About author
Play The Ball
This article has been written by Dale Budge. Dale is a well known rugby league commentator and journalist, having covered the sport for over 10 years.

I think squad numbers are better than complete randomness, like football, not the nba.
Main striker often wears 9 (I know, not always) keeper wears 1, defenders 2 – 5, midfielders 6 – 10 etc, mixed in with a few big numbers.

A Vatuvei no. 5 shirt would have done well over the years. SJ7 and RTS1 could be mini gold mines with the kids.

But in reality someone wearing the 23 in a 17 man game would be annoying at least initially.

*They did use 31 players in first grade this year if you can believe that.
Didnt like the idea in 1997 but it didnt have time to catch on really. A key component of the personalised number is also featuring the players surname. Would the revenue clubs gain from personalised jerseys with the surname on top replace the revenue they make from selling that spot to sponsors???