You would have to be an idiot to try and predict how a season will go for a team before a ball is even kicked. Luckily we have those in abundance here at kiwileaguecentral.com. Here is our bold, and probably completely wrong, guess at how season 2016 will go for the Sydney Roosters.

It’s very hard to maintain season-on-season success in competitions with a salary cap, and in 2016 the Roosters finally felt the bite after an incredible run which saw them win three minor premierships in a row. 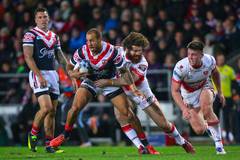 Our prediction: The Roosters have a tough 2016 after three years at the top. Credit: photosport.co.nz

A tough start to the year – which included trips away to the Raiders and Cowboys – was made worse by the absence of star halfback Mitchell Pearce.

Defensively the Roosters were once again among the best in the competition, but they struggled to replace the impact of James Maloney and Roger Tuivasa-Sheck on the attacking side.

Young utility Jayden Nikorima stood out through the early rounds and created a selection headache for coach Trent Robinson when Pearce returned from suspension.

Where they finished: 11th