How 2016 will go for…the Rabbitohs

You would have to be an idiot to try and predict how a season will go for a team before a ball is even kicked. Luckily we have those in abundance here at kiwileaguecentral.com. Here is our bold, and probably completely wrong, guess at how season 2016 will go for the South Sydney Rabbitohs.

The Bunnies made a couple of quality additions over the off-season who added some real impact, and none more so than big-game forward Sam Burgess. 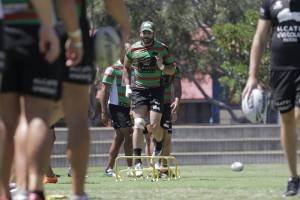 Our prediction: A 6th-placed finish for South Sydney in 2016. Credit: photosport.nz

Having that extra ball-carrying threat in the middle of the park brought another facet to South Sydney with the ball in hand, while Cameron McInnes and Damien Cook proved a potent one-two punch out of dummy-half.

Murmurs all year of internal unrest didn’t appear to affect Souths too much as they pushed through to the post-season.

Where they finished: 6th