You would have to be an idiot to try and predict how a season will go for a team before a ball is even kicked. Luckily we have those in abundance here at kiwileaguecentral.com. Here is our bold, and probably completely wrong, guess at how season 2016 will go for the Penrith Panthers.

The under construction sign remained up for a Penrith team who for the last couple of seasons have appeared to be building towards something special. The Panthers played some quality footy in 2016 nonetheless, storming home with purpose but ultimately falling short of the eight. 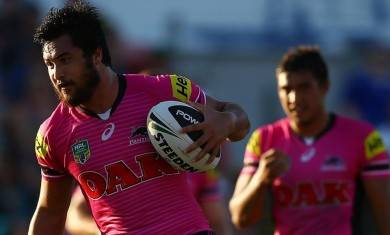 Our prediction: Penrith finish 13th, but many of their Kiwi players star in 2016. Credit: penrithpanthers.com.au

The talented Bryce Cartwright had a big year in the back-row along with new recruit Trent Merrin, who played some big minutes at both prop and lock to help Penrith through the reduced interchange. Playmaker Te Maire Martin played a handful of games as injury cover in his rookie year.

Kiwi backline trio Dean Whare, Peta Hiku and Dallin Watene-Zelezniak scored plenty of tries and joined forces again at the end of the year with all three being included in the Kiwis for the Four Nations.

Where they finished: 13th