You would have to be an idiot to try and predict how a season will go for a team before a ball is even kicked. Luckily we have those in abundance here at kiwileaguecentral.com. Here is our bold, and probably completely wrong, guess at how season 2016 will go for the St George Illawarra Dragons.

Much like last season St George Illawarra proved a constant point of frustration for opposing teams, combining stubborn defence with a willingness to grind it out in contests. The only reason they didn’t play finals football in the end was a lack of polish on attack when it really counted. 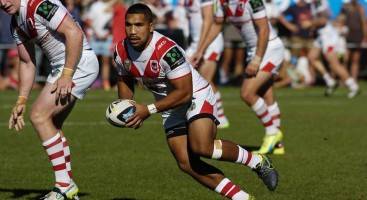 Our prediction: Despite a good defensive record the Dragons finish 12th. Credit: www.dragons.com.au

A torrid start to the year – where they faced eventual top-eight finishers in five of their first six games – meant the Dragons were always up against it to make the finals.

Kiwi bookends Leeson Ah Mau and Russell Packer clocked up some impressive numbers and delivered some much needed sting to the Dragons’ pack, while former Warriors Siliva Havili and Sebastine Ikahihifo both added to their tally of NRL appearances.

Where they finished: 12th