Horrible Warriors Not As Bad As Advertised 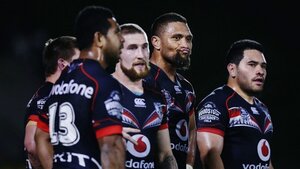 Again this week I hear and read comments about the Warriors being in turmoil and that there is no light at the end of the tunnel for them.

Umm, what rock are you living under? The season ends this weekend. The light is shining brightly after that – is there another club in the competition getting a better haul of off-season signings than the Warriors? Roger Tuivasa-Sheck, Issac Luke anyone??

I’m by no means a Warriors cheerleader. In fact, often I get told I’m too hard on them. Heck, they aren’t even the side in the competition that I cheer for – I’m of an age that followed teams long before the Warriors came into the picture. But to say the club is in turmoil is so far wide of the mark that it is actually laughable.

The last few performances of this season has been pitiful for sure. Most of what we’ve witnessed in the past couple of months has been barely reserve grade standard but to be honest they are essentially a reserve grade quality side at present. This was a team that had a pretty ordinary roster at full strength, then they were dealt a bitter blow by the footy gods in getting a run of injuries worse only than the Panthers. I read this week that the injuries are no excuse for the way they have played. Really? Try taking the two starting props, the starting hooker, the starting halfback, starting five-eighth and starting winger out of any NRL side and see how they go. The Panthers were tipped by all and sundry as a title contender this year but will instead play to avoid the wooden spoon this weekend. Why? They have the same side that was 80 minutes away from a grand final a year ago. They have been decimated by injuries all season. Are they in a mess? I don’t think so. By round 1 2016 all of those guys should be back in the mix and they’ll be one of the title contenders again.

The reality is there are a number of Warriors players that have played the past few weeks that are not first grade quality and some that never should be again. The side has fallen from the top four to knowing they’d miss the finals weeks ago. That is a huge let down mentally and the side has responded by playing like they are lacking desperation. Should that happen of course not but in reality it is foolish to think it wouldn’t be the case.

There are deficiencies in the Warriors roster that has been badly exposed with some key injuries but it takes a significant amount of time to fix up a roster problem. Chief executives get that opportunity mostly through free agency and the current Warriors boss has managed to sign the competition’s best young fullback and the best attacking hooker to add to the mix next season. Will that turn them around and make them a competition heavyweight? Not at all, but it will have an impact. The roster needs more work and Jim Doyle’s plans are becoming clearer. He will bring more balance to a roster that has been assembled in a poor manner over the past few years. But it will take a season or two to fix.

In a hard-capped league, you need a balance to any roster to be successful. A mixture of experience and youth, attack and defense, structure and x-factor. This current Warriors roster looks like it has been put together by simply judging the talents of each player on their own, without looking at how they would fit together collectively.

The Warriors are copping a hiding in the press for the way they are playing and fans are naturally upset at what is being dished up. Criticism is warranted, there is no doubt about that. But that criticism needs to be realistic as well. To think there is no end to this streak or no light at the end of the tunnel is foolish. To think everything must be scrapped and a new start is what is needed is silly too. Why take six steps back when three will do? This will be a better side in 2016 and for the Warriors, 2016 starts Monday.
About author
Play The Ball
This article has been written by Dale Budge. Dale is a well known rugby league commentator and journalist, having covered the sport for over 10 years.