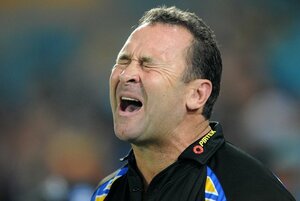 Raiders coach Ricky Stuart has “forgiven” his NRL side for their 28-12 loss to the lowly Gold Coast Titans on Sunday. Why? Because their season had been “stolen” from them by officials last week.

What a pathetic excuse for a first grade coach you have turned out to be Ricky. Your team lost last week, not thanks to poor officiating but because they weren’t anywhere near good enough in closing out the match with a 10 point lead and less than 10 minutes left on the clock. Former test and Origin prop David Shillington was stupidly penalised for getting involved in the play-the-ball on the last tackle of the penultimate Manly attack. Chances are if Shillington hadn’t given away a dumb and inexcusable penalty the game would have been over and the Raiders finals’ hopes would still be alive. Instead the Sea Eagles got and extra set and scored from it.

Stuart’s side then conceded the try to Manly fullback Brett Stewart with time expiring on the clock. Sure, replays will show that Stewart was actually off-side but no Canberra player was seen complaining to the referees about it – they had no idea. They also were too busy kicking themselves for their flimsy tackling that allowed Stewart to be in position to score the match-winner.

I have criticised the refereeing in a number of games featuring the Canberra side this year but any impartial judge would say the Raiders blew that game rather than anything else. To now use that as an excuse a week on is nothing short of pathetic and sums up Stuart as an NRL coach – too busy deflecting scrutiny of his own shortcomings to see the wood for the trees.

It is the incessant bleating by clowns like Stuart – the NRL coaches who want to push blame onto anyone and everyone but themselves – that actually helps put more unnecessary scrutiny on the already under-fire officials. No wonder this area of the game is in such disarray.

It is time that everyone involved in rugby league took a stand against this rubbish. There are no fair points in Stuart’s comments today. Journalists attending the post-match press conference need to hold him to account. Why say these things now? Why not last week, at the time it happened? Why not point out the countless moments in the game where the referees made a mistake in the Raiders’ favour? Why not address the dumb play of Shillington or the missed tackles that led to the try?

Bad habits have crept into the game sadly and responsible media coverage has gone out of the game thanks to the commercial realities of the privately-owned media organisations. It is too easy in the modern day to simply hear some provocative thoughts from a coach like Stuart and to simply turn them around into a story, rather than to continue to question him about it in the interest of fairness. Stuart gets to have his say, his comments reported everywhere. The referees don’t get to say why the lop-sided penalty count against Stuart’s side was because they weren’t able to match the other team’s speed of game and resorted to trying to slow the play down, incurring penalties. If the referees were allowed to shift blame back onto the teams or the coaches, maybe things would be different.

The NRL has banned coaches from criticising referees but in the past week we’ve seen both Stuart and Sharks coach Shane Flanagan – another serial offender – push blame onto referees for poor performances. Why they are not hit with fines is beyond me but more importantly it is time for those charged with covering the sport for the masses to hold these idiots to account.
About author
Play The Ball
This article has been written by Dale Budge. Dale is a well known rugby league commentator and journalist, having covered the sport for over 10 years.