You are using an out of date browser. It may not display this or other websites correctly.
You should upgrade or use an alternative browser.
Sharks youngster Fa’amanu Brown is one of several promising young stars to come out of the Canterbury region recently. Currently playing with Cronulla’s feeder club Newtown in the Intrust Super Premiership, ’Nu’ is on his way back from a serious knee injury. Below we talk about those things, plus the time he microwaved his iPhone and became an internet celebrity. 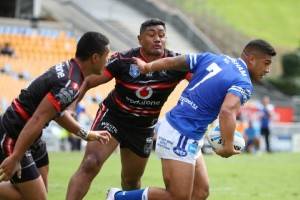 Fa’amanu Brown in action for Newtown against the Warriors in the Intrust Super Premiership. Photo: photosport.nz

You are coming off a torn ACL suffered at the NRL Auckland Nines last year, so how’s the body and mind feeling since being back?

It’s obviously been a hard 12 months coming back from injury, but I have had the right people around me and great staff at Cronulla.

I am just grateful to be back and be in shape. I am trying to get my confidence back over the next couple of games and hopefully get a run in first grade soon.

We have seen you play halves, hooker and some back-row so far, what position do the Sharks view you in long term?

They sort of see me as a utility, so pretty much at training I get put everywhere. For me right now it’s not about playing one position, but other positions just in case an injury or suspension happens.

Half or hooker is my preference, but if lock or back-row has to come to play then I will do that. Wherever I can run, I think I am more dangerous when I am running.

That must be hard to prepare for in a training sense, you need to have the speed and skill of a half but also the size and strength to defend in the middle of the park…

I guess it is pretty hard to balance it. I do a lot of practice with the middles, they are running straight at me and trying to increase my confidence in physical tackling. I don’t know how I balance it but I guess when you get put in first-grade you just do whatever for that spot and the rest doesn’t matter too much.

You became a social media sensation recently after you revealed you had blown your iPhone up in the microwave. Could you believe the reaction to that post?

Just one Facebook status and it went viral. We had a home game last week against the Dragons and I was just walking to my seat afterwards and the whole crowd was giving it to me. I had to cop it for a bit, but surely it’s over now.

I found out from my brothers and family in New Zealand because it came on the news. I went onto Facebook and people were tagging me, and then Gal (Paul Gallen) txt me asking ‘did you really blow up your phone?’. I thought one second wouldn’t blow it up, but one second was all out took.

Hopefully Apple don’t find out because they could sue me for that!

You are one of a growing number of professional players to come out of Christchurch, does the city remain close to your heart even now you are living in Australia?

It is quite special coming from Canterbury, I guess with the broken city after the earthquake. There are a few of us now, there are a lot of young kids coming through the system that have gone over to Australia. I am just proud and grateful to be playing footy again and representing my hometown.

In 2011 (the earthquake) hit just before I moved over. It was probably the hardest transition for me because I didn’t want to move just in case something happened to my mum and dad or siblings. But I look back now and it was probably the best thing for me. I took the risk, and life is a risk.

And you still head back there when you get the chance?

I do, probably about three times a year. It’s quite hard during the season. When I was injured I could just go back whenever but now I am busy week in, week out with rehab and that. But I am quite lucky I have close family who call me every day, especially mum calling me up every day to see if I am OK.