You are using an out of date browser. It may not display this or other websites correctly.
You should upgrade or use an alternative browser.
Across more than a decade in the Auckland senior competition Ron O’Regan can probably best be described as transient, although his movement between multiple clubs was more out of necessity than want.

Having called Fowlds Park and the Mt Albert Lions home from the age of five, O’Regan was left with no choice but to head across town soon after cracking the premier team at the Lions, in order to protect his place in the Auckland representative side.

Auckland were a force to reckoned with at the time, regularly beating professional club sides and international teams, and for O’Regan donning the blue jersey was always a priority.

“When I got into the premiers at Mt Albert, I went straight into the Auckland team with coach Don Hammond (aged just 18 at the time),” O’Regan said.

“That was a good stepping stone straight away and I was lucky there.

“But unfortunately Mt Albert then got relegated, and to play in the Auckland team you had to be playing first division. So I made my way down to Victoria Park with City Newton in 1980.

“It was a move out of necessity that’s for sure, but what I didn’t actually realise at the time was that I was moving to be coached by the future Auckland coach, Bob Bailey, so it worked out pretty well.”

A first-up loss to Australia at Carlaw Park in Auckland was cancelled out by the thrill of helping New Zealand to a 19-12 win over the Kangaroos at Brisbane’s Lang Park less than a month later.

While things were humming on the representative front, O’Regan soon found himself on the lookout for a new club back home.

“City went to the second division so I had to move again to play first division, so I went over to Te Atatu,” he said.

“Through this I wasn’t going to top clubs, I was just going to clubs I thought I could fit into. They were clubs coming out of second division and getting promoted.

“It worked out real good for me in the end because we won a Fox with Te Atatu in 1988.”


The moves around Auckland proved worthwhile and by the end of his playing career O’Regan boasted around 60 appearances for Auckland, ranking him as one of the region’s top contributors from a playing point of view.

Of those games O’Regan said the clear standout is Auckland’s 1987 victory over a Wigan side who had just been crowned world champions, after defeating Manly in the World Club Challenge.

“I think I was around the highest number of games for Auckland,” O’Regan said.

“I played eight Tests for New Zealand, but the main game I remember is from the Auckland tour to England in 1987.

“Bob Bailey was the coach and we took a great squad – Gary Freeman, Shane Cooper, Mark Horo, Kevin Iro – it was a hot squad.

“In the last game we played Wigan and we were just too strong and beat them (10-6).

“That game stands out and in the Auckland jersey – that was my highlight.”

In retirement O’Regan has gone on to enjoy success in a totally different sport and is now counted as one of the leading greyhound trainers in New Zealand.

“After I retired from league I thought I would try something else, so I got involved in greyhound racing,” he said.

“Here I am 24 years later still doing it and doing it quite successfully.

“Right now we have 16 dogs in work. We have downsized a little bit. We have been in the Group 1 and ran third and fifth and we train winners most weeks.” 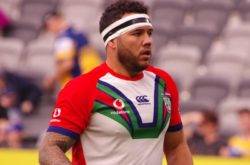