You are using an out of date browser. It may not display this or other websites correctly.
You should upgrade or use an alternative browser.
For the last two years Charnze Nicoll-Klokstad formed an important part of the Melbourne Storm U-20 side, scoring 16 tries in 37 appearances where he regularly played across every backline position.

At 20 he is already an international, having made his Test debut for the Cook Islands in their 2017 Rugby League World Cup qualifier against Tonga last year.

We caught up with the new Warrior to see how he is adjusting to life at Mt Smart Stadium as he pushes for a first-grade debut in 2016.

How are you enjoying being back on Kiwi soil?

It’s all good, between the staff and all the boys at the Warriors I have found making the transition has been as easy as possible. The boys have been really welcoming.

I am enjoying it heaps, especially getting to play locally on my hometown fields and having my family come and watch. That was something that I missed heaps but I am able to do it now.

I was able to put on a few kilos over the off-season so that will help through the early rounds. I put on 4kgs through extra gym work and keeping on top of my diet.

Tell us about where you grew up and played your junior footy before heading over to Australia.

I have lived all over Auckland, I had heaps of junior clubs growing up. I played for Mt Albert, Glenora, Waitemata and my first club was City Newton.

I know a few of the boys here at the Warriors now from playing with and against them when we were kids. Patrick Sipley (Warriors Intrust Super Premiership player) is one of the guys I grew up.

You have been through the Melbourne development system, have you noticed any differences between the way they do things and the way the Warriors do?


What’s been the best part of being back in Auckland?

Just being able to be with Kiwis and be boys with everyone, especially when we are off the paddock and everyone is laughing around and having a joke.

But in saying that the 20’s team I was with in Melbourne, three-quarters of them were from New Zealand so it sort of feels the same I guess.

I have a few siblings over in Australia. But my parents are down in Taupo and I have aunties and uncles in Auckland so it’s nice being back close to them as well.

There are some star players at the Warriors with guys like Simon Mannering, Shaun Johnson and Roger Tuivasa-Sheck, who have you been learning the most off so far?

Probably Roger because he is more the position I have been training in all pre-season. All of his talk and the specific communication he brings to the team, I have kind of stood back and watched all he has done with that.

Even all the other blokes who aren’t really senior players – Charlie Gubb and those guys – I have been learning a lot off them.

You can play anywhere in the back five and also in the halves, do you have a preference and how do you view that versatility?

I don’t really have a preference. Wherever the opportunity pops up I will take it with both hands.

That versatility is a strength and weakness. The strength being I can play any position so wherever there is an opportunity I will take it. 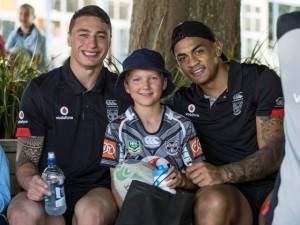 Since arriving back at the Warriors you have been re-connecting with your faith as well, how important has that been for you?

In the pre-season I started going to a group called e-connect which is a group where we kind of talk about our relationship with god and stuff. I have got that bond with those boys here who share that relationship with god like Roger (Tuivasa-Sheck) and Charlie (Gubb), and that is something I enjoy going to.

It’s something that I guess I have been missing. To come back to that is special and I am enjoying it.

Over in Melbourne there was just a few of my family over there and my mum was here – she is one who is usually always trying to get me to go to church. I never really went to church over there until one of the young boys Zion Ioka (former Kelston Boys’ High School halfback) came over and we started going together.

It helps with all the pressures. Being able to give it over to his hands it takes a weight off your shoulders.

Had the pleasure of chatting with Charnze at the members Christmas party and again at the Nines. Great guy. Really humble and happy to chat. Was surprised he didnt make the Nines team after Cappy gave him a huge wrap during the preseason...