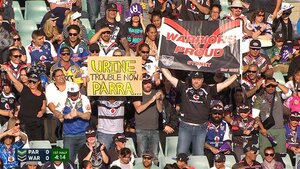 With the Warriors having missed the play-offs for a 5th straight year it is inevitable that the media and public begin to question the position of head coach Andrew McFadden. While Jim Doyle has insisted he won’t be commenting till after a review several senior players have pledged their support to the embattled coach. Many frustrated fans can’t understand this support given the results and assume that the players must have been put up to this. While I am sure there is an element of damage control with regards to the players endorsement their does seem to be a genuine undertone behind it all. Those who remember the demise of both Brian McClennan and Matt Elliot will know they received nowhere near this level of player support. So why are the players so loyal to McFadden?

Part of it may very well be that McFadden has proven himself loyal to the players, in fact you could say the biggest criticism of McFadden is he is just too darn loyal. Loyal to a fault.

The defining moment in the Warriors season was the round 8 capitulation to Melbourne. Coming off a win against the Bulldogs and heading to a favorite hunting ground for an Anzac day clash against a Melbourne team who were struggling for cohesion on attack, the stage was set. Sadly the Warriors were emphatically beaten 44-0. Following this loss 6 players went out in Auckland mixing energy drinks and prescription drugs which became a much talked about off-field drama.

The fallout from this led to the 6 being unavailable to play St George in Auckland the following weekend and players also being held back from international duties. While in some quarters this was seen as brave leadership and drawing a line in the sand, the reality is it was a slap on the wrist with a wet bus ticket. The likes of Lisone should have been expecting to have at several weeks in reserve grade following his poor goal line defence in the Melbourne game, but when you add in his off-field misdemeanor it wouldn’t have been unjust if he had not tasted first grade again till June. But McFadden is loyal and after only missing the one game Lisone joined 3 of his energy drink buddies in waltzing back into the side. In fact the only players who missed further games was Vatuvei for mental health reasons and the soon to be released enigma Konrad Hurrell.

Vatuvei is perhaps the biggest example of misguided loyalty. He is a Warriors great and at his best was the most destructive winger in the competition. He has always been prone to make errors, but in yesteryear there was more than enough up-side to counter these infuriating mistakes. Sadly the 2016 version of Vatuvei seems to have all the errors but none of the up-side. However Andrew McFadden has continued to pick Vatuvei his loyalty seems to be to a Vatuvei of another era. It must surely be time for the club to FACEFACTS and convince Manu that his days as a first grade winger are past ensuring that his legacy is not further damaged.

McFadden has also been too loyal to some of his younger players, at different points in the season Lisone, Vete and Lolohea all could have benefited from longer spells in reserve grade as consistency of performance seemed to escape them. While early in the season both Robson and Wright seemed to further prove the adage that it is harder to get out of a McFadden team then it is to get into one.

I am not convinced that dropping a few players would have necessarily made 2016 a success, but it would have established a culture that consistency of performance is the number one criteria in being picked for a Warriors team. This could have been a foundation for future success to be launched from.

As 2016 comes to a close it would appear that the club is going to be loyal to McFadden. While Jim Doyle is yet to announce his intentions it is unlikely that someone as savvy as Doyle would have his most senior players commenting regularly about their desire for McFadden to stay only for him to announce he was leaving.

We all have that sense of misguided loyalty towards the club, but if McFadden is hanging round he best ensure his loyalties lie to the club first and individual players second.
Reactions: mt.wellington, tajhay and koolkat
About author

rugged. If you remember when he first came on board he instantly dropped Feleti Mateo and Konrad Hurrell for consistency and fitness issues. Players were stoked as they saw a coach who wasnt scared to drop big names and was willing to hold people accountable.

Whats happened to that???

rugged. If you remember when he first came on board he instantly dropped Feleti Mateo and Konrad Hurrell for consistency and fitness issues. Players were stoked as they saw a coach who wasnt scared to drop big names and was willing to hold people accountable.

Interesting eh! Ivan was a bit of an enigma like that as well, refusing to pick Inu, but at the same time being very loyal to the likes of Bill Tupou