You are using an out of date browser. It may not display this or other websites correctly.
You should upgrade or use an alternative browser.
As the start of the 2016 Four Nations approaches kiwileaguecentral.com takes a look at the three teams the Kiwis will come up against, assessing their strengths and weaknesses from a New Zealand point of view.


The Kiwis haven’t tasted Test series success in England since 2005, and come off a 2-1 series defeat to the Poms there last year.

Wayne Bennett is at the helm of the host nation now as well, which will ensure they are an almighty test for their upcoming opponents.

Key player: Sam Burgess. The man who can inspire the whole England pack to lift to the standard of New Zealand’s. Big Sammy loves the confrontation, and in front of thousands of his own fans that is only going to multiply. Scary.

Where the Kiwis can get them: The class of New Zealand’s outside backs is a point of difference against England, and the way the Kiwi flyers finish off their set plays – and defend those thrown at them by England – will be a big factor.

Get excited for: Jason Taumalolo v Sam Burgess: Two of the best middle forwards in the world, these two are set to clash directly in the centre of the park, in collisions that will be fun to watch but, we imagine, horrible to be part of. Don’t be surprised to see Burgess try and ruffle the 2016 Dally M Medal winner’s feathers with some cheeky tactics, but we get the feeling ‘JT’ will be just fine with that.

When they meet New Zealand: In the tournament opener on October 30 NZT. The match at Huddersfield has already sold out, and it’s going to be huge in the context of the tournament. The winner will go a long way to booking a spot in the final, while the loser may find themselves relying on a victory against Australia in order to make the final.


After a couple of seasons where they were dominated by their bitter rivals on the international stage, the Kangaroos are back and have won the last two trans-Tasman Tests.

New Zealand will lean on their experience from 2014, when they beat Australia twice in the Four Nations to win their second title.

Key player: Cooper Cronk. The Kiwis have already shown they are going to go after Johnathan Thurston and hit him at any given opportunity, which is where Cronk’s role becomes so crucial. If the Storm No.7 can continue to do his work then restricting Thurston will do little good for NZ. Consistently intelligent last-tackle plays from Cronk undid the Kiwis in the Perth Test a couple of weeks ago.

Where the Kiwis can get them: In the forwards is where most pundits will agree that New Zealand have it over their trans-Tasman rivals. The Kiwis are bigger in most places, but also more skilful. If Jason Taumalolo, Tohu Harris and Jesse Bromwich play to their full potential it could be enough to get through the intimidating Roos.

Get excited for: Jordan Rapana v Valentine Holmes. Two players who had stellar seasons at club level, scoring and setting up tries for fun through most of the NRL competition. Rapana had a modest debut in Perth, while Holmes was outstanding on the flank for Aussie. Both have the pace and elusiveness to turn a game in an instant.

When they meet New Zealand: In the second game of the tournament, as the headline act of the double-header in Coventry. The Kiwis will have come off a tough encounter against England a week earlier, while Australia will have just faced Scotland, in what you assume will have been a comfortable Kangaroos’ victory.


Scotland are the big unknowns when it comes to the 2016 tournament, but will run out with a couple of big names in their 17 led by NRL players Lachlan Coote, Luke Douglas and Euan Aitken.

Their clash against the Kiwis will also be a preview of the two nations’ 2017 Rugby League World Cup pool clash.

Key player: Lachlan Coote. North Queensland’s custodian adds some real class to the backline. Coote is a genuine threat when running the ball, with a quick turn of pace, and can chime in as a playmaker to help on attacking sets inside the 20. Generally reads kicks well and is a brave defender. 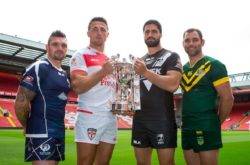 Breaking down NZ’s Four Nations opponents
VIDEO: Kangaroos v Kiwis match highlights
Residents prove too much for NZ Maori
Where the Kiwis can get them: The Kiwis have it over Scotland in every positional battle when you break it down, but the real area where New Zealand can do some damage against the Bravehearts is with their edge forwards. Kevin Proctor, Tohu Harris and Martin Taupau could cause chaos if the Kiwis can get some early front-foot ball. Watch for a number of tries from Kiwi big men out wide in this one.

Get excited for: Solomone Kata v Euan Aitken Two players who have met at club level in the NRL, they both bring powerful running games. While Kata and Aitken are noted try scorers, their work carrying the ball out of yardage could end up being just as important.

When they meet New Zealand: The final pool game up in Workington is sure to draw a big contingent of fans from nearby Scotland. There is every chance that the Kiwis will go into the match needing a big victory in order to qualify for the final, while Scotland will also have had two games to figure out what is required to beat one of the top three nations.