Bench Selection and Rotation is a Shambles The big talking point to come out of the weekends game against the Manly Sea Eagles is undoubtedly focused on Tui Lolohea being not only named to play from the bench but also the lack of game time he was given. Running with a hooker or utility as part of the 4 man bench is not an uncommon scenario within the NRL so it comes as no surprise to see the Warriors adopt the same set up. The problem that the Warriors face and the inevitbile trouble they get themselvves into is when they run a hooker/utility (let's use Jazz Tevaga as the example here) while at the same time they seem hell bent on including a back just for good measure.​
While there is no doubt that Lolohea has incredible amounts of natural ability the cold hard truth is that of the positions he can play we currently have blokes in those positions who are in better form and/or when given half a chance to claim that spot as their own they've grabbed it with both hands. As a back playing from the bench the only way to get game time is to hook another back from the field which is a clear and obvious waste of a substitution. You can argue until you're blue in the face and suggest that we need a back on the bench in case of injury but this is the NRL and you don't select a team based on "what if's", you select a 17 that is going to complemint each other which in turn is going to give the side the best chance of coming away with the victory.

Just because something is the norm doesn't always mean it's the correct way to go about things, it's a case of "horses for courses". Most sides do play with a back up hooker but it is unnessesary with this current Warriors outfit. I've seen plenty of discussion around the selection of Tevaga on the bench and plenty have suggested he is there not only to cover hooker but also to play in the back row. With Luke in the side we do not need a back up hooker as he is an 80 minute player. To bring Jazz onto the field in place of Luke is just making a sub for the sake of making a sub and it's a waste. 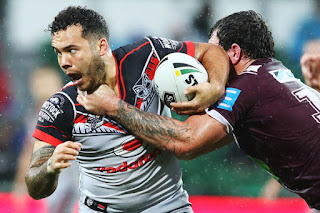 The only way that Lolohea can be effective coming on as a subsitute is to remove Tevaga from the bench. This will in turn give Cappy greater flexibility and more options to run Tui instead of using Tevaga and keeping Lolohea to sit around twiddling his thumbs for 80 mins. Going with this system covers the following;


No doubt Tui will be first in line to have a crack at the #6 jersey in 2017 but unfortunately right now he has to bide his time. The continual selection of a utility as well as a back on the bench is something you'd expect at school boy level. Not only does it make it difficult to inject both players into the game you are also sacrificing a spot on the bench for a forward. 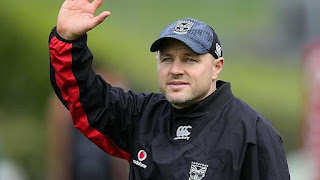 ​
You don't select a team based on "what if's" and from what we've seen this is exactly what is going on. It isn't often you find yourself required to make changes with someone in your starting backline but when you do there are always options within the squad to cover and act as a band aid solution to see that particular game out. Tui's time will come but based on these bench selections and the rotation being implemented, Cappy's time will come sooner.

Agree:
1. That the bench/rotation policy has been an achilles heel for the team and a brain explosion from the coach.
2. Tevaga shouldn't be on the bench until he can bend the line.

Disagree:
1. Lolohea covers the forwards - lock (aswell as the backs). His defence is apparently a concern. To have him cover lock could be disastrous on defence esp. with tiring props and small/weaker halves next to you. This would suck the energy out of Tui and his impact on attack could have minimal effect because of it.
2. Lock is a workhorse position that's very technical in defence. Keyword/phrase = "workhorse", "technical in defence". It's not a position Tui can pick up in a week.

Possible solution:
1. Push Kata out to the wing and slot Tui in at centre - we'll lose Manu's aerial ability but than can be compensated by switching Kata and Fus for such plays. Who cares if defence reads it, they still gotta out jump Fus and it can be used as a decoy.
2. Swap Tevaga out for Sipley or hopefully Thompson recovers in time for kick off pushing Afoa on the bench to replace Tevaga.

Reality:
1. Manu is an icon who needs game time to get his confidence back so option 1 won't happen.
2. As you say - Tui is in an unfortunate position but I'd hate to think we'll be going over this same issue with Ata Higano if he proves better at 6 in the 2017 pre-season. This club is stacked with great potential in the halves - Mason Lino, Erin Clark from ISP. I'm not sure how good the potential is in NYC but imagine it's there.