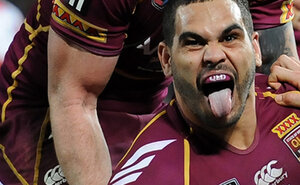 Sometimes you just have to tip your hat to an opponent.

That was the case in Origin III last night. No matter what NSW came up with, even if they were at their absolute best, it wouldn’t have seen them run close to a Queensland side that was simply awesome.

The Blues had their chance in game I, where they were the better side for the most part but failed to come up with the clutch play when it was needed. They won game II with Queensland off their game but the Morons showed their true class in Brisbane to secure a series victory in style.

Johnathan Thurston’ performance in this series will see him become a future immortal, if his prior achievements hadn’t already secured that status. The Cowboys play-maker was phenomenal. He had plenty of help from the evergreen Corey Parker, the always-influential Cameron Smith and a number of others.

The win will be satisfying for Smith after a week in which Alex McKinnon and Channel 9 made him out to look like a heartless footy player that cares nothing other than winning. It was shameful and (yet another) embarrassing look for the code. Smith deserves better and the demolition in Brisbane will go some way to help.

The no-punching rule encouraged a number of cheap shots and a lot of pushing and shoving, which detracted from the contest. Blues prop James Tamou was lucky not to be sent off for a swinging arm tackle on Jacob Lillyman, which must be described as reckless at best. Not satisfied with that, the Cowboys enforcer then went back with a second swinging arm to finish him off. The second incident in my view was intentional and should have resulted in a send off. Instead Tamou was placed on report and charged with a careless high tackle that will see him miss one game for the Cowboys.

The system is flawed. The Cowboys play well enough to allow Tamou to be picked for rep duty, miss out on his availability due to that selection and then see him suspended for an incident that had nothing to do with them. They are the ones paying him handsomely. Rep and club footy must be separated in terms of dealing with foul play moving forward. If those two incidents were deemed careless, what constitutes reckless or even intentional?

Finally, Trent Merrin could miss up to a month of footy for the Dragons after a dangerous throw tackle last night for NSW. It was a bad tackle and deserves punishment but the Dragons are the poor buggers that incur that penalty. As nasty as Merin’s tackle was, it wasn’t intentional yet his punishment is significantly more harsh than that of Tamou’s, even though there is a case to say Tamou’s foul play was intentional.

Discuss and debate these issues with the author via the Twitter handle @playtheballnz
About author
Play The Ball
This article has been written by Dale Budge. Dale is a well known rugby league commentator and journalist, having covered the sport for over 10 years.