Auckland’s King signs on with Leeds

You are using an out of date browser. It may not display this or other websites correctly.
You should upgrade or use an alternative browser.
Auckland product King Vuniyayawa will add another chapter to his remarkable story in 2021 when he links with UK Super League side the Leeds Rhinos. (Photo: King Vuniyayawa. Credit: Aria Management Group – Bodie Friend).

The move means that within the space of two years the 25-year-old will have gone from playing second division league in Auckland with Manurewa, to having been a member of both an NRL and UK Super League squad.

Last year the Fiji-born forward appeared five times for the New Zealand Warriors before a broken hand ended his campaign.

Vuniyayawa, who has been capped three times by Fiji, said he is excited to be linking with the Rhinos on a one-year deal.

“I would like to thank (Leeds coach) Richard Agar for giving me this opportunity and he made the decision even easier for me to come over to play in Super League,” Vuniyayawa said.

“I know Leeds have an extremely strong pack, I can’t wait to meet the boys and rip in.” 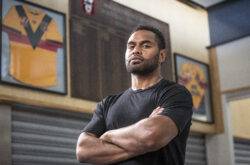