Another Finals Another Referee Howler 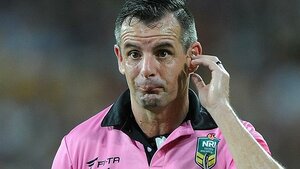 It seems like every year at this time we have a big sudden death finals contest ruined by a refereeing howler.

That was certainly the case in the Roosters v Bulldogs affair at Allianz Stadium tonight as on-field referee Matt Cecchin and video referee Bernard Sutton somehow conspired to award a try to the Roosters that was clearly never scored. At 8-4 there was little between the sides until the decision went in favour of the Roosters, who scored again from the next set as the Bulldogs were still reeling from the refereeing shocker.

Like the Cowboys in previous finals series, the Bulldogs fan base will be livid with the way the protocols around the use of video replays so cruelly saw their side ousted from the competition. The one-sided score line would suggest the Roosters did it easy but they ran away with it after the result became a foregone conclusion on the back of the controversial 51st minute decision.

The fact that Cecchin had to guess whether it was a try or not when he quite possibly had no idea needs to be addressed. The sport tried for years to send decisions upstairs without making a call on the field but that system worked no better than the current one – in fact the move to the current system came after widespread criticism of the old model.

The protocols around the use of the video actually gives an out to the referees. The on-field refs have the excuse that they needed to make a call on the run, the video referee can use the argument of insufficient evidence to over-turn an on-field call and then the on-field referee simply points to the video referee decision as “that’s their opinion” when players complain. Every aspect of the process gives referees an out and there in lies the problem. No-one owns these decisions and/or mistakes. It is much easier to hide behind process.

Next year the NRL will use a bunker back in Sydney to make all calls that get sent for video examination. Apparently that will lead to greater consistency though the protocols around the video use don’t appear to be changing other than the decision will now be made off-site. It is hard to see how that will greatly improve the end product.

The answer to this dilemma is simple – put the onus back onto the blokes on the field with the whistle. If video is required let it be those on-field referees who examine it. If they feel the need to change their minds or rule one way or other, it should be left entirely to their discretion. The NRL should put no other protocol around it’s use other than if the referees want to use the video they can and they simply make their call based on what they’ve seen live and on replay.

By doing that, the referees own those decisions – they cannot pass the buck onto anyone else and cannot hide from decisions that are entirely theirs. Yes, it means more pressure on them and of course there will still be mistakes made but at least there will be no confusion around protocol. With the focus squarely on them, you’d have to expect the poor referees to be weeded out and the better ones to flourish. They are professionals after all.

Reactions: Raurimu Massive
About author
Play The Ball
This article has been written by Dale Budge. Dale is a well known rugby league commentator and journalist, having covered the sport for over 10 years.