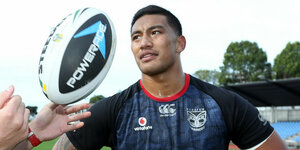 In 2016 Albert Vete took the hefty step from being an interchange man to a starting NRL prop. In doing so he kept Test front-rower Ben Matulino out of the starting 13 for the Warriors, and further established himself as an important figure in the club’s forward rotation plans.

A rugby union star for most of his life, Vete was picked up by the Warriors while captaining the St Kentigern College First XV in the Auckland college competition in 2011.

Below we talk code switching, fatherhood and the men he hopes to follow in the footsteps of in rugby league.

You were a late adapter to league after playing union most of your life. How has the transition over the last few years been from your point of view?

It has been pretty tough, I have definitely had to learn pretty quickly, and ‘Cappy’ (former Warriors coach Andrew McFadden) told me that he can’t wait for me to have another couple of years to get to play my best footy.

His faith in me allowed me to play my game and find what suits me on the field. I am obviously a different prop to Benny [Matulino] and Sam [Rapira] in the way I run, and they have got different skill sets that I don’t have, and vice versa.

But I am enjoying it, which is probably the main thing, I knew that if I wasn’t enjoying it I would be back playing rugby union. It has just been finding what works for me and understanding my role for the team.

Do you notice there are things missing from your game that perhaps are just second nature to other NRL props who have always played league?

Yeah there definitely is, that is a part of it and as a result I have to learn fast and be able to pick things up quickly. I think I can do that though and I learn pretty quickly, if I am told to do something once then I tend to remember it. That has helped me, but still I feel there is a lot more to learn in league.

I have got a lot more in me and I am pretty excited about developing and hopefully becoming a pretty strong prop for the Warriors.

Have you been tempted to go back to rugby union at any stage?

There was a point there in 2014 where I was contemplating going back to rugby. But I felt like I didn’t really give rugby league a proper go, and that I didn’t really apply myself fully.

But I felt like I did that in 2015 and the results were pretty obvious, I got to play a few more games than I thought. I did think about changing back to union, not lightly either, because I have a rugby background and grew up playing that. But I am pretty happy with the decision I made to stay and pursue league.

You have had some good role models in terms of NRL forwards, with the likes of Ali Lauitiiti and Sam Rapira being around the club at the same time as you. Which player or players have had the biggest influence on you so far?

Probably a mixture of Benny [Matulino] and Simon [Mannering]. I like Benny’s aggressive approach to the game, he loves to smash blokes and that is what I do and like to do as well. I kind of see how he does it and make it my own.

As for Simon, he is just a tough competitor and I am a pretty competitive person and am passionate about what I do, and trying to do my best, and he is a great example of that. I just try and follow him.

Earlier this year you became a dad, how much has fatherhood changed things for you as a footy player?

Yeah, it definitely puts things into perspective. When I go home and am pretty stressed and gutted the little one is still crying and just wants to be fed and held.

That has definitely been a massive positive for me. It has changed my life but all in a good way.

Has it been tough as a young guy to balance the demands of being an NRL player alongside being a dad?

At the start I was pretty worried that I wasn’t going to get enough time with (daughter) Ariella because of the travel that we have to do. But it worked out well and the games where I had to go away weren’t for too long.

The balancing act is really hard, but I have got a really supportive partner who helps me.

Away from that stuff what do you do with any down time?

A lot of university work in down time. It’s a good thing to keep the mind off footy before we go back for pre-season and get into the real work. I am studying a Bachelor of Physical Education.
Reactions: Inruin
About author