A rather dumb half-measure 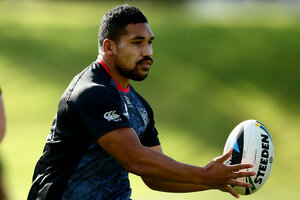 For the past two weeks the Warriors have started Siliva Havili at hooker for the first 13-15 minutes before replacing him with Nathan Friend for the majority of the match.

I don’t really understand the thinking behind it. It seems pointless having a guy on the field for impact for such a short period – especially when the opposition is not really fatigued at that stage. I could see the rationale of starting Friend and bringing Havili on just before halftime to try and expose a tired defensive line – in the same way most coaches use a bench hooker. Havili seems the more creative and better suited of the two hookers to use as an impact player.

Surely Havili isn’t in need of a break after just 15 minutes of play? It appears to be a complete waste of an interchange. With a forward pack that isn’t exactly dominating opposition packs at the moment the extra interchange could be a way of keeping the forwards fresher and therefore a little more competitive.

I’d like to see McFadden give Havili an extended run in the number nine jersey now that Thomas Leuluai is on the shelf. Havili was the best player on the field in the 2014 ANZAC Test match and I’m surprised he hasn’t seen more first grade action since. Sure, there will be teething issues, as there are with any young player, but the upside appeals to me.

With Sam Tompkins and Konrad Hurrell to return to the side in the next fortnight, coach McFadden has some decisions to make as to who misses out on a back-line spot. One option would be to utilise the versatile Tuimoala Lolohea on the bench but they’d need to back either Friend or Havili to play 80 minutes most weeks.
About author
Play The Ball
This article has been written by Dale Budge. Dale is a well known rugby league commentator and journalist, having covered the sport for over 10 years.