Managed only seven games last year but scored four tries in that time. The Hamilton-born wing has a proven track record – having topped the Holden Cup try-scoring chart in 2017 – but is stuck in a congested group vying for back five spots at Cronulla right now.

A mountain of a man, standing at 197cm and tipping the scales at 120kgs, Auckland-born Paseka is entering his third season at NRL level and shapes as a great prospect. Is in a fortunate position at Manly, learning off two of the best props going around in Martin Taupau and Addin Fonua-Blake.

Earned eight starts on the wing for the Sharks in 2019, with an impressive strike rate of five tries in that period. The Ellerslie Eagles junior did enough to earn a Test debut with Samoa in his rookie year and looks set for a big career.

4 tries in 5 games for Ronaldo Mulitalo

Had a disrupted year after transferring to the Cowboys and being asked to play fullback, centre, five-eighth and wing. Back at the Broncos in 2020, Kahu will be looking to rediscover the type of form which made him a regular for the Kiwis between 2015-17.

He’s not the attacking force he once was – last year scoring only one try and setting three up in 18 games for the Panthers – but at 30 Whare remains a class presence on the edge.

Was a key part of the Penrith pack last year, serving as both a starting and interchange front-rower across 24 games. Averaged 69 metres per game at club level and earned a Test debut with Toa Samoa in the end-of-year Test against Fiji.

Enjoyed a strong rookie campaign in which he finished the season as a starting prop for the Wests Tigers. Prior to that he was a permanent fixture on the bench, and across the year averaged 87 metres and 17 tackles.

A former Junior Kiwis captain, Luai will get his chance to become an established NRL player this year at Penrith following the departure of James Maloney. Fleet-footed and creative with ball in hand, he’s a dynamic player who set up four tries across 13 NRL games last year.

The Wests Tigers’ Mr Fix It. Chee-Kam was one of the NRL’s best interchange weapons in 2019 and proved a game-winner on a number of occasions. A class presence in the back row, he’s been a victim of his own versatility so far in his career and has often been shunted to the centres as cover.

The Tigers win it with the last play of the game!!

All three of his first seasons in the NRL have been in struggling Bulldogs teams (he’s yet to have a season where they have managed to win even half their games), but Smith has been developing well individually. Scored 12 tries last year as a starting winger. 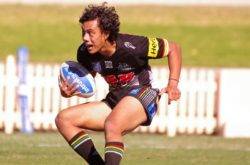